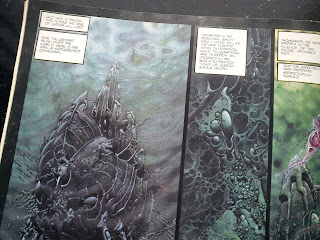 It's nice to buy things, put them in your library and see them "sweeten through the years like wine". To see them grow and develop, see them take on new meanings. Like: you buy a book, read it in 1987, then save it and read it again in 1992, 1998 etc, and all the time the work takes on new colours, new meanings, new dimensions. It's some sort of alchemy: "the alchemy of consciousness and time" as Ellie would have it.

Anyway: it's fun to buy books and magazines and re-read them over the years. And here I have a magazine just like that, Heavy Metal from February 1983. It runs the poem "The Ark" by the French artist Caza, a graphic rendition of a poem by one Francois Bazzoli. I've read it again and again since the eighties and each time it astounds me.

It's about an ark, a stony vessel fastened to the ground, going through epochs of water, earth, air and fire. It's very majestic, the images perfectly mirroring the words, words like:

The Ark is closed... waiting.

The antediluvians, guided by the immemorial voice
of a myth, are already there.

That's the beginning, showing The Ark going through torrential rains and then getting drowned completely - "a shipwrecked cathedral". It's sleeping with the fish as they say. Then the water recedes, exposing the ark to the light of day:

The Ark reappeared on the earth's surface, covered
with slimy excrement and silt, enclosed in anticipation
- immobile.

The closed ark: shrine and prison, mountain and temple,
chest and skull. Arcane.

The colours at the beginning were greyish violet. And the water epoch was green. Then the epoch of earth and sand becomes ochre yellow; The Ark is worn down by the desert winds, severe abrasion seeming to dissolve it completely. But then a new epoch dawns, transforming The Ark into a reddish violet gem:

Resurrection: in the sparkling air, it is The Ark! Delivered
from its origin of chalkstone, the rarified nave reveals
its silvery chrystallizations to infinity. (But still opaque.
The time of revelation hasn't come yet, prince.)

(Thus, the age of air: of clear and cold night, of
purification, of coagulation - a chrystalized psalm.)

(Millions of years frozen in the instant of dawn.)

Then the sun goes nova and everything falls apart, literally:

And see: what boils under the shell, this terrible lava of unleashed gods and spirits of the underworld, spring up and are united with the fires of the howling sky, in the incandescent apotheosis of a cosmic copulation.

Everything burns and desintegrates, except, of course, The Ark. The glorified nave withstands it all, just quietly sailing away into the abyss. Stars fade and die in this era of emptiness, akâsha, the fifth element. Only The Ark remains, attracting matter and contracting into a cosmic egg. Everything ends with a Something orbiting a center, a rainbow coloured orbit with lights in the dark:

Thus, prince, The Ark will not open onto the outside
- it is abolished as well as the inside. It turns in on its
entirety - inverts itself, and is revealed.

So... so here is the one that was integrated with eternity.

Here is where opposites converge... here, finally
recomposed, the ultimate principal of the living
universe, Alpha and Omega...

Here is THE ARK.

In other words, this is a work of genius. The original poem might have been in Italian or French, but the actual version to me has echoes of a poet like T. S. Eliot.

Furthermore, no human beings are depicted in "The Ark". No humans are part of the story -- and yet it's so moving. We see some lizards at the beginning, we see the odd fish -- but other than that it's just water, earth and air. Pictures and words cooperate seamlessly, merging into a new amalgam. It's alchemy!