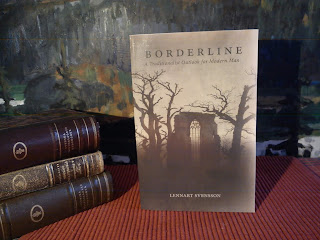 In 2015 Numen Books published my philosophical essay "Borderline -- A Traditionalist Outlook for Modern Man". Now it's been reviewed by the Finnish site Sarastus.


Sarastus is a Finnish langauge site for traditional culture. Maybe typical of the site is writer Markku Siira, describing himself as "a traditionalist from Northern Finland. Among his interests are the history of Europe, esotericism, religion, metapolitics, poetry, literature, and etymology". Now Mr. Siira has written and posted a review of "Borderline" on Sarastus. He has also kindly provided me with an English translation, which I will publish below with only some marginal, introductory notes by myself. In other words, here is given the whole of Mr. Siiras text, complete and unabridged.

The title of the review is "The Boundary Lines of Traditionalism". Siira begins the text with an overview of the world situation, a situation that could warrant pessimism:


National-radical circles throughout Europe often flirt with Western or Indian esotericism, not to mention the Spenglerian cyclical worldview. Radical traditionalists may mention the Kali Yuga of Hinduism; the dark era, when after some greater or more prosaic event the world sinks yet deeper into the decay brought about by liberal modernism. For cultural pessimists, this negative undertone is not unfamiliar, whatever their religious context, and I admit that I have often thought so myself during the decades of my esoteric truthseeking.

Then we're told of an instance of optimism:


Apparently one needs to be born Swedish to achieve a particular mixture of bright optimism and traditionalism, as is the case with Lennart Svensson. Svensson, who was born in 1965, is a writer who in addition to his Swedish works has previously written English portraits on Ernst Jünger and the composer Richard Wagner. Svensson lives in Northern Sweden, and has a degree in Indology; in the course of these studies, Svensson became convinced of the truth inherent in the Traditionalist school of thought.

In 2015, Numen Books published Svensson's latest book Borderline: A traditionalist Outlook for Modern Man. I purchased this book after reading Svensson's blog and after having followed his Facebook updates, which interested me, but also irritated me somewhat because of his lavish future optimism and excessive esoteric syncretism. However, it is at times broadening to step beyond one's own stubborn trains of thought, and read something different.

Below is given the rest of the review, which I won't comment on:


Svensson's view is indeed somewhat different. Drawing from the Vedic tradition, meditation, as well as the metapolitics of the European New Right, he has the nerve to claim that the grim and depraved Kali Yuga belongs to the past, and we have in fact stepped again into the time of Sat Yuga, the new golden age of peace and beauty, even though many in the midst of the world's turmoils are not yet aware of it. Svensson also believes that the devastation of a third world war is unlikely, even though many major powers speak of a new Cold War and rattle their sabres verbally and even physically.

To get to the the core of this kind of thinking, Svensson has written Borderline. In this book, he aims to present integral traditionalism for today's man, and at the same time opens the border areas of philosophy, science, art and morality. Svensson serves a holistic table setting, and highlights the historical characters from the ancient Greek Plotinus to Goethe, Carl Jung and to Swedish Emanuel Swedenborg.

Svensson's traditionalism also integrates Nietzscheanism in it, which at first glance seems a little strange, but the reader gets used to these arguments in the context of the book. According to Svensson, Nietzsche, who talked about the death of God, was not an advocate of nihilism and materialism, but one of the European idealistic "grey area" philosophers: the man of Will, who channelled ancient Greece's Dionysian and Apollonian energies.

Borderline is a comprehensive package: it includes metaphysics, quantum physics, reductionism, romance and ethics. The reader will become familiar with Ernst Jünger's friend and a kind of mentor, the German philosopher Hugo Fischer; with Fichte, T.S. Eliot and many other "borderline cases". Svensson even delves into the more dubious secrets of spiritual awareness, with reference to Rudolf Steiner's anthroposophy and Christology.

Also part of the book are "Nietzschean" poet Edith Södergran, as well as the painter of the Romantic movement and the European soul landscape artist, Caspar David Friedrich.

Despite this breathtaking character cavalcade, Svensson's work is held together by a clear red thread of perennial philosophy. This thread bridges together the holy writings of the Indian Bhagavad Gita, Christian mysticism, as well as Western arts and sciences. Svensson has also read his Julius Evola, and encourages readers to give him a chance, even in the midst of our seeming chaos and nihilism, for a worldview based on order and balance, as well as for the meditative "I AM"-way of life. As is always the case in human spiritual development, everything starts with oneself; this is how the Evolian spirit of nobility can be excavated from under the internal indolence through esoteric knowledge and active action.

Siira ends his review with this quote from the book, an aphorism by me LS summarizing my creed:


You have to be an Aristocrat of the Soul exerting order, not a Chaos Man exerting chaos. And truly, these are chaotic, decadent times. The Chaotic Mindset rules seemingly supreme. So then, how is it to be an Aristocrat of the Soul in this time of decay? What does it mean today to be an esotericist having order within; how does he project this order to the outside world? Does he even do it; is he maybe satisfied with being a quietist, reclining in splendid isolation? This is also feasible. To abstain from direct action is also a way of acting. The Aristocrat of the Soul is the key figure of today, when the esoteric and mythical forces are rejuvenated. Kali Yuga is over. Sat Yuga is here, an era dedicated to art, science and spirituality. [Borderline, p 216]