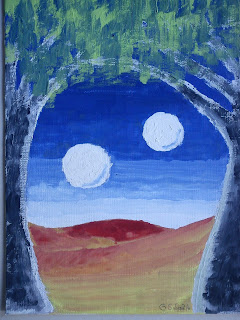 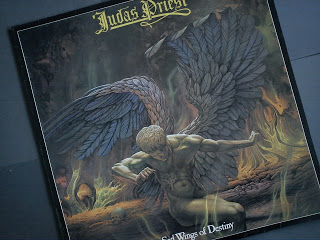 Rob Halford is the singer and frontman of British band Judas Priest.

Also, he has penned most of the band's lyrics.

And some of these lyrics are more than mere "singable rock lyrics". They are poems in their own right.

In this post I will try to prove this. This is a survey of the best Halford lyrical passages, from 1976 through 1988.

We will primarily focus on the lyrical, ringing, sounding aspects of the words of Halford. However, we will also mention some wise Halford lyrics, poems teaching the listener Actionism.

In the late 70s Priest rose to fame as a band, with words and music creating a new brand of fantasy rock. Focusing on the lyrics we can begin by looking at Stained Class (1978). On this album Halford’s lyrical ability is working overtime, especially in these lines of the title track:

Wild-eyed and tight fisted, I'm fused to the bone

Pole-axed out and burnt

From the same song we get this bridge with the words kind of crammed in, however, in a lyrical, ringing fashion:

He slaughtered and faltered and altered the world

But by doing so smashed all his hopes and utopian dreams

Whipping, stripping, peeling the flesh off, relentless and senseless

His lust snapped like vipers whose fangs sank in deep

To infest and decay from the core

From the same album we have Exciter, depicting the progress of a Flaming Sword-type of guy. In my eyes poetical, in themselves ”musical” lines, are the following:

Fries into a crisp,

Let him get close to you

So you're in his trip,

Blister up and singe

In the chorus we then have the deathless words, ”Who is this man? … You'll never see him // But you will taste the fire upon your tongue”

And more fiery poetry follows, like ”Predominant complacency // Leads to beguiling lies”… and the ending lines:

When he leaps amidst us

All shall bear the branding

Of his thermal lance,

Only when there's order

Will his job be done.

Next from Stained Class we have White Heat, Red Hot, a lot of quotable stuff in that one but we’ll limit ourselves to the first verse:

Deliver us from all the fuss and give us sanctuary

Lead us all into arena, magnificent in death

Well let us serenade the sinner, we'll follow in his step

These are strong words, kind of Actionist in nature, along with the mere ring of the words.

A final lyrical highlight from Stained Class is this passage from Invader: ”I came across a smoking field, pulsating afterglow // I saw a seering flash of light erupt and skyward go // I staggered back in dazed surprise / What was it I had seen? // And as I stood there mesmerized I heard my spirit scream”

In the same year as Stained Class (1978) we got the album Killing Machine. From the opening track (Delivering the Goods) we get these lines, the group describing its way of being: "Charging, vein faced, as active as one-hundred solid proof // Megaton, Leviathan, we're ready to hit the roof"

Action as being, be strong, shine – that’s the Actionism of Judas Priest, visible here and in Take on the World from the same album: ”Sing your song, we'll listen to you. // Sing your song, the spotlights on you.”

More Actionist poetry is given in the title song, Killing Machine:

I never give true answers, I never tell no lies

I never walk a straight line, so never get surprised

I don't ask no favors, so don't get abused

I learned to win when I was young

So I'm never ever gonna lose

So, where shall we go now?

We kind of began in the middle of the group’s career. And, now I feel like going backwards... which will lead us to 1977 and the album Sin After Sin.

These are authoritative lines from a divinely inspired writer.

In Raw Deal we get this deathless impression of a drug-induced pandemonium: ”I'd had too much, floating around // Statues alive, seconds are hours”… We also get this immortal line, just right in the fragmentic collage of images: ”I guess I dream in pictures, not colors”…

This is poetry and nothing else.

Halford was good at nonsense lyrics – meaningless and yet musical, like the opening line of Dissident Aggressor: ”Grand canyons of space and time universal”…

We also mean that the mere title of this song (Dissident Aggressor) is poetical.

Equally poetical is the very title of the previous album, Sad Wings of Destiny (1976), where Halford treats us to more lines in the area of surreal fantasy poetry. First, ”Skyrider, supersonic flyer // Nightdriver, demon of desire” (Island of Domination); and also, ”Solar winds are blowing // Neutron star controlling … Meteors fly around me // Comets die, and then they // And then they, you wanna see how they try to surround me” (Deceiver).

Quotable as a more sober passage, still poetical, is this from Dreamer Deceiver:

… in the cosmos is a single sonic sound

That is vibrating constantly

And if we could grip and hold on to the note

We would see our minds were free... oh they're free

For its part, this mirrors the Hindu idea of shabda, the primordial sound from which everything has been manifested.

Now let’s go forward in the catalogue. We’ve already covered 1978 so this will take us to British Steel of 1980.

This album was a big hit and it’s got lyrics to match it.

We get it all here; the nonsense (”From a fireball we came, ’cross sea and mountain // we were drinking beauty with our eyes,” The Rage); and the chauvinism (”Chopping away at the source soon the course will be done // Leaving a trail of destruction that's second to none,” Rapid Fire); and the supermanism (”Been inclined to wander // Off the beaten track // That's where there's thunder // And the wind shouts back,” Grinder); and the science fantasy (”fearing for our lives, reaped by robot scythes … meeting with our death, engulfed in molten breath”).

The last quote was from Metal Gods -- and more on the divine side we got on the following album (Point of Entry, 1981). In Solar Angels Halford maybe had his lyrically finest moment, a hymn praising gods of light. Reportedly Halford is the son of a minister and you could say that it shows in lines like these:

Sky processions we are watching you arrive

What light spirals lifting up to go

This is having a way with words. This is poetry – for, in themselves, even beyond the accompanying music, these lines sing.

Look before you leap has never been the way we keep

Our road is free

Charging to the top and never give in

Never stops the way to be

Hold on to the lead with all your will and concede

These powerful lines we find in the song Freewheel Burning on Defenders of the Faith (1984). Indeed, as the lyric intimates, victory is a must; an Actionist must always envision victory and not be dragged down by myopic everyday thought, by ”down-to-earth wisdom” saying that you can’t always win. Instead, you must always envison victory, laud victory, praise victory – like Halford is doing here and on a 1988 song, Hard as Iron: “And I’ll destroy, last thing you’ll hear me cry, is victory, is victory…!”

In the just cited cases the poetry and the wisdom merges. The same is the case with Reckless from Turbo (1986), an Actionist paean if there ever was one:

Around me I feel the shock waves,

Building for the energy

A force field no one can break through

Solid as rock no wonder

First placed in everything I do…

“First placed in every thing I do”: there we have it again, the unmitigated worship of victory!

Above we have given you some immortal Halford musical poetry. But he also writes prose poetry. Like this little blurb from Defenders of the Faith:

"Rising from darkness where hell hath no mercy and the screams of vengeance echo on forever, only those who keep the faith shall escape the wrath of the Metallian..."

This was signed, "Master of all Metal"... and I seem to trace the hand of Halford behind this.

On the previous album, the one with the fearsome metal eagle on a yellow background, we had a similar sketch:

"From a distant land came a winged warrior. Nothing remained hallowed, nothing remained sacred as it uttered its battle cry: Screaming for Vengenance."

And the last three words was also the title of the album in question. All told, these little prose poems paint an unequalled aura of majesty and fantasy. Like the best of Rob Halford's rock lyrics.

With this we must lay down our pen. The brilliance of the Halford lyrics are stunning. Along with a strong, Actionist message we also, especially on the early albums, get a metal-sounding fantasy poetry with spiritual overtones, a crossing between Mayakovsky, William Blake and Samuel T. Coleridge.