Depicting the Crane in its Orbit 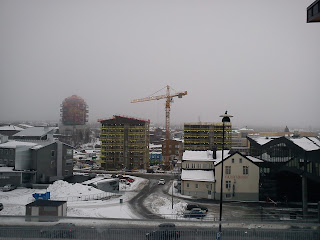 
In Sweden these days we have an early summer heatwave. 20 centigrade in the shade or so.

Therefore, I post this February picture to cool you off. It's taken from Övik Central Station. A tower crane is seen rotating over the buildings of the city. As it were, the photo is "depicting the crane in its orbit," referring to a song on the Cosmos Soundtrack from the early 80s.