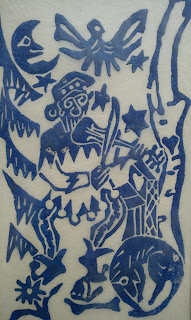 Programmatically, I'm not a pagan. However, as an artist I explore pagan symbols and narratives. I acknowledge the pagan world. And the following poems are an example of all this.

The Glory of Hyboria


In the glory of Hyboria
four rivers fell into the abyss of Hel,
the Inner Earth of eternal reality.

Hyboria is gone, Middle Earth is no more,
crumbling in the upheavals of Ragnarok –
gone with its rivers, lands and circumpolar abyss.

Hyboria is gone but the sons of Arya live on,
migrating from the sinking Midgard
to the Scandinavian lands,
there to thrive for generations
into our day and beyond.

Behold, it's a fine day
behold eyes of blue
mirroring the heavenly blue...

Hyboria is gone but Arya lives on.

I roamed Jotunheim and Vanaheim,
I searched Midgard and Svithiod the Great
for the Impossible Freedom, I read runes of
the future in Baldur’s Breidablick.

I wake at night in the peace of 62 degress north.
The moon speaks in silvery runes about the
coming grandeur of the Nordic regions,
the palearctic zone and beyond.

See the moon rise over Nornaskog. See the sun
shine on the pine trunks in the evening,
turning them to gold, pure gold.
Justice, willpower and drive shaped
the Nordic lands back in the day
and will shape them in times to come.


My grandmother told me about vittra,
shiny, silvery people roaming the Norrland woods.
They were not men; they were superhuman, they
were of elven kin, demigods ruling the land
along with the devas of vegetation.

My grandma left me a map and one day I will
venture out into the woods, follow the secret
path to Vittra Land, seek out the shiny people
and let them teach me the language of the plants
and the way to bliss beyond the Beyond.

And using a secret means to entrap one
I might find me a vittra maid and we’ll go
walking over the moors and admire the moon
mirroring itself in a tarn, reciting poetry and
dance to the rhythm of troll drums –

beyond the doldrums, in the lively
climes we’ll skip the light fantastic,
”come on and join the elven’s dance,
their wizardry and wild romance” –
the vittra leitmotif of eternal glory.


The valkyries talked about weapons and horses,
horses and weapons... and battle arrays,
adventures and treasures, scudding clouds,
surging waves and a deserted moor with a
lonely tree under a grey sky.

The valkyria is no more and the age of war
is about to end – but the valkyria mindset
lives on as a paragon for women
living ”action as being” – for women
seeking rest in action, women
conducting operations to gain knowledge,
movement as a state of mind,
action raising you mentally.

The valkyria is gone but her mindset lives on.


Illustration by my father 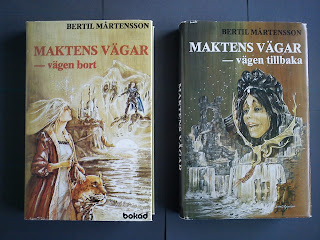 Summary in English: this is a post about some Swedish fantasy authors.