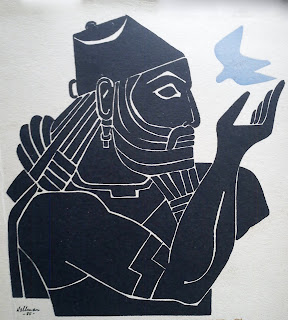 A special outline of history has been published before on this blog. Now we shall go into details of that sketch. The first article will be this one, deliberating about the Egypto-Chaldean Age, 2907-747 BCE.

The basic idea for my whole historical approach is that the past is partitioned into 2,160 year long eras. The specific length, 2,160 years, is due to the astrological precession of the equinox.

I said this in an earlier post. There, I delineated history with a focus on the three latest eras: the Egypto-Chaldean era (= Middle Eastern bronze age), Greco-Roman era, and our current, Faustian era.

In other words, the oldest era I choose to look closer on was the Egypto-Chaldean age.

And the current post will solely be about that era.

The Egypto-Chaldean age, astrologically founded as it is, also coincides rather well with what common knowledge, “school science,” and established thought calls the Bronze Age. For example, iron only came around at the end of this age, the Egypto-Chaldean age; the metal in question would more definitely shape the following age, the Greco-Roman.

The biotope and playground of this era is the Middle East, with the heartland in Mesopotamia and Egypt.

Further, it might be that free-standing statues, one of the characteristics of the next age, the Greco Roman, did occur in dynastic Egypt – but these early statues had the DNA of the relief in them, depicting the figure strictly frontally. Therefore we hold that the relief proper is the symbolic art form of the Egypto-Chaldean age. Egyptian and Assyrian reliefs define this era artistically.

In the same era the Egyptians worshiped the Bull of Apis. It began in the second dynasty (2890 BCE-) and continued during the whole age, into the 22nddynasty (a dynasty ending in 720 BCE). During this late dynasty the cult for instance took the form of deceased Apis bulls being interred in giant tombs. They can still be seen in the so-called Serapeum of Saqqara. Impressive – yes; a pedantic ritualistic observance, typical of late times – that too.

As stated above we hold that the symbolic vehicle of this era is the war chariot. Just imagine Assyrian and Egyptian reliefs of the era, with the king in a chariot wielding bow and arrow; this seems to capture all the splendor of the kingship of this epoch. For its part, horseback riding came about later, around 1000 BCE, and thus only came to shape the next era.

For its part, Egyptian history is rather easy to fathom. It has got a unity of space and time, like in a classic play. Space: the Nile valley. Time: the timeline called Dynastic Egypt. To it all the Nile ensures fecundity, like one very long, drawn-out oasis surrounded by deserts in the east and the west.

Trying to depict Egyptian history from the beginning to the end would rather well cover the Age of Taurus, the astrological era we have mentioned above; it would be a symbol of the whole age: the Middle Eastern Bronze Age, the Egypto-Chaldean Age.

And as for Egypt, what is the situation around 2907 BCE?

As with any emerging era in this pattern, archaic Egypt around 2900 BCE is there, almost complete from the beginning. For this early period already has reliefs and statues, mastabas and pyramids, temples and hieroglyphic writing. There is political unification in the Nile valley region.

A canon of the arts and of religious manners is established. And it will never be changed during the whole era of ancient Egypt. How to depict man and gods in reliefs and statues, how to write hieroglyphs, how to bury the dead; all this is meticulously followed during the centuries that follow. This is seen as an example of the famed Egyptian conservatism – but as this study will show, an early establishing of artistic etc. pattern is the norm for all historical eras. We mean it in this way: the style of the whole Greco-Roman era harks back on archaic times; the Faustian era never stops to admire quattrocento art.

In the early Egyptian era (“the Old Kingdom”) we for instance have the glory of the Fourth Dynasty under such pharaohs as Menkaure. The diorite statues of him are a paragon of human portrayal. Here we see no colossal statue as the style launched by Akhenaten much later; the scale is humanly relatable yet elevated, the finish is smooth – and this with, what, copper chisels? There are enigmas surrounding this early period, chiefly symbolized in the pyramids. And we would like to suggest that the largest pyramid of Gizeh is not built by Menkaure’s dynastic predecessor Khufu, it was built by Hermes much earlier, as was the sphinx. The mastabas are also much older than officially acknowledged.

Nevertheless, in itself early Dynastic Egypt was a wonder of advanced civilization as intimated above. Later periods, glorious as they are, would never achieve the simple splendor and quiet majesty of its art and architecture.

Egypt temporally declined during the Seventh Dynasty, a time of geopolitical division to last some centuries. But the Eleventh Dynasty saw unification of the land anew, Egypt by this experiencing a literary and artistic golden age. Nubia was now conquered.

This “Middle Kingdom” period of blossoming was rather long, some 400 years. The Twelfth Dynasty equaled the golden days. After this we saw the invasion of a foreign people who took power: the “Hyksos”. – The Hyksos never came to worship any Egyptian gods; it remained an alien ruler class, even though it adopted Egyptian names. Its lasting imprint on Egyptian culture was teaching the Egyptians warfare, like introducing armor and war chariots. The disciples made good use of them in the “New Kingdom” era, becoming conquerors in western Asia by warrior pharaohs like Thutmose III and Ramses II.

Historically the New Kingdom era is the best known of the ancient Egyptian epochs. We here meet discernible individuals like Tutankhamun, Akhenaten and Nefertiti, we see the temples of Karnak, we see the tombs of the Valley of Kings. Superficially elegant all art forms are now kind of rigid and solidified; nothing new is created, we only see perfection in details and an increase in size: giant temples and giant statues, like the works of Ramses II in Abu Simbel and Karnak.

In other words: the New Kingdom art is superficially refined and polished, at the same time having an undercurrent of decline and stagnation; as before conservatism rules, everything harking back on early Dynastic times. Apart from the above intimated gigantomania we see the development of wayward ceremonies, like the breeding, nurturing, and burial of Apis bulls.

Even the superficial glory of the New Kingdom sees it end; the era declines after about 1000 BCE. We then see Egypt ruled by a Libyan dynasty, an Ethiopian dynasty; clearly, the barbarians are at the gates, yea, they even storm the gates and take over the whole land. And no Egyptian warrior glory is there now to save the realm. By this the whole ancient Egyptian era essentially ends, in the pattern employed in this study; astrologically the end is marked by the year 747 BC. By this time Egypt just exhausts itself; its days are over, its star sign is descendant.

Even before, in the New Kingdom and maybe even earlier, the whole land was like a giant museum, dedicated to preserve the past. So even after its creative energy was spent in the 700s BCE Egypt continued to live on like one whole display of times gone by, shaped in stone.

The drama is over. Taurus is descendant, Egypt (and Mesopotamia) have had their time. Culturally and politically this is now doomed to be periphery, not heartland. A new star sign is ascendant; a new people in a new region will be the focus of the next 2,160 years: the Greco-Roman peoples under the sign of Aries.

And this, the Greco-Roman age, is covered here. 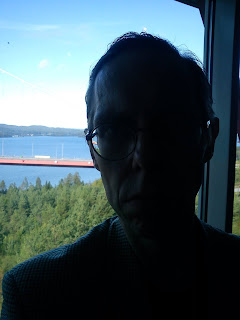 Are you primarily a fiction author or a fact-oriented author?

Are you writing anything right now?

You once wrote Ernst Jünger -- A Portrait. Has Jünger influenced you?

What about your private life?

I have nothing to say about that.

In the form having squares for “civil stand” I cross the one saying, No. Satisfied?

No, rather, “do nothing and everything will be done”.

How does it feel to grow older?

Nice, supernice. A certain calm pervades your being.

What about the ways of the world?

A new golden age is looming. And I will make it come true.

Now we’ve covered your work, Jünger, your civil stand, your plans for the future... is there anything you would like to add?

If so, then I thank you for the interview.

Thank you. It was nice meeting you.

The same to you.