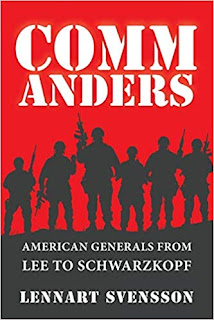 My new book is out now. It's called Commanders -- American Generals from Lee to Schwarzkopf. Buy it on Amazon. -- Swedes can buy it on Bokus.com. And even on Adlibris.

The first draft of this book was written in the spring of 2000. On a manual typewriter, in Swedish. And, now, at long last, I've completed it in this form, in English, as befits a subject like this: American war history.

I take a look at American Wars from the Civil War through the Gulf War by way of the generals fighting them. I focus on personalities and anecdotes, on everything that might interest me: culture, tactics, weapons, everything beside politics per se. For, I well know that "American Wars" and why they were fought is a controversial subject. In the introduction I intimate that I doubt the official narrative of the Gulf War, and even WWII.

However, I don't go into politics in this particular study. But you still get a lot in Commanders. On the Amazon page we read of the book:


Commanders is a collection of biographies about American generals. (...) Written as popular history, each general is individually described. Author Lennart Svensson does everything from telling anecdotes, reflecting on culture, war and history, to musing over operational details, meticulously narrating each general’s story. Commanders provides “good stories, well told” in the genre of the historical essay. At the end of the book there is also a chapter examining topics such as the mirroring of American wars in literature and film.

As Svensson says in the introduction: “these are war stories, told by the fireside with a glass of whisky in the hand”.

The study includes the following generals:

If you are a Swede, you can buy the book on Bokus.com