Reading Tips: SF From the Right 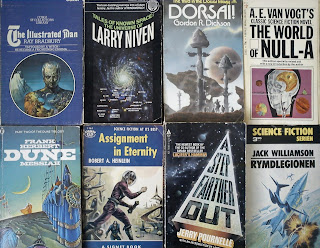 
I've written the essay Science Fiction Seen From the Right. And below is a list of some reading tips associated with the book. Concerning the sf/fantasy novels, short stories and essays treated in Science Fiction Seen From the Right, what can I give as mere reading tips? Implicitly they are of the conservative, right-wing kind. And they're all durable classics, I'd say.

Thus, based on the curriculum of Science Fiction Seen From the Right, books to recommend as good reads are:

. Frank Herbert, Dune, Children of Dune and God Emperor of Dune. Very rewarding reads all. (Conversely, book 2 of the series, Dune Messiah was a let-down and a disappointment, Herbert here trying to tear down the monument he had built in Dune. Avoid!)

. C. S. Lewis, That Hideous Strength. This third part of the Space Trilogy is a classic-in-being, a convincing tale of fighting nihilism; at that, a successful fight and not ending in dejection as the comparable European sf classics such as 1984 and Brave New World. Of the dystopian genre proper I can maybe recommend Boye's Kallocain but it's rather dismal too; however, I did like it as a read. But that might be because I'm a Swede like Miss Boye.

. Tolkien, all of his books. His opus has grown over the years, gaining relevance.

. Ernst Jünger's sf and fantasy may be hard to appreciate for a reader steeped in the Anglo-american literary mode, however, you don't waste your money when investing in the fantasy-tinged On the Marble Cliffs and the "tale of a future city"-sf novel Eumeswil, both available in English. (Jünger was a German who lived 1895-1998, otherwise famous for his WWI memoir Storm of Steel. Another sf novel of his, The Glass Bees, is also translated but as a read it isn't so appealing, rather dull actually -- even though personally, as a Jünger fan, I appreciate practically all of his books.)

. Among the remaining British novels covered in the book I'd recommend Robert Holdstock's Mythago Wood from 1984, a very brainy and also alluring story of myths and legends living symbolically in a wood, and contemporary persons going into that wood and becoming enchanted, becoming initiated into the archaic strain of culture. This is "fantasy in a science fictional mood," as Brian Aldiss said.

. Remaining "conservative classic sf reads encountered in my book", American variety, what are they? -- If I should highlight three books mentioned in my study, worth to read even for their own sake, it'll be Dorsai! (1959) by Gordon R. Dickson, a brainy-yet-alluring novel, a slow moving but dense story, a story with a mythical elevation, this pioneer of military sf. I could also mention To the Stars by L. Ron Hubbard (a novel also entitled Return to Tomorrow, 1954), a story having everything a comparable Heinlein story has, plus some narrative skills, a talent for milieus and scenes (which, for his part, Heinlein in some way lacks, being as he is more of a bare-bones narrator). I can also recommend Philip K. Dick's Galactic Pot-Healer (1968), a story of an encounter with a god archetype, as such not negative and nihilistic as most other similar sf stories are.