Heinlein and My SF Study 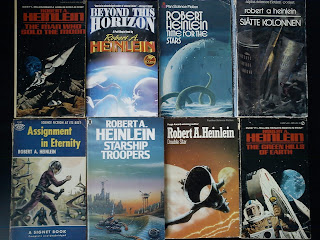 In 2016 my essay Science Fiction Seen From the Right was published. Hereby some lines describing the role of Robert A. Heinlein in it.


A central character of my SF study is Robert A. Heinlein, an American author living 1907-1988. "Heinlein, tu prends la première place dans ce livre" would be a fitting dedication. That is, "Heinlein, you take pride of place in my book."

Heinlein, along with defining modern sf, also defined right-wing sf. And as a person he remained a hard-right conservative from WWII and on, being opposed to godless Communism in a time when the Western world's intellectuals either (1) hoped for a communist revolution or (2) were rather forgiving against the atrocities of the Bolshevik Empire.

Today, everyone knows of Heinlein's other side. Of his libertarian, even libertine charatcter. But that was established only by his later works, from say 1966 and on. Earlier, he was a Responsible Man through and through, conveying his creed in an eminently readable style.

So, in my science fictional preachment I want to remind the sf readership of this, of Heinlein as a conservative lodestar.

This is not about worshipping an author figure. It's about having sf novels and stories conceptualizing reality in a right-leaning, willpower-driven way. A way sorely needed today in the zeitgeist of materialist nihilism and relativism.

Going backwards in Heinlein's catalogue as for viable conservative numbers, works I cover in my essay, we can begin with Glory Road of 1964. In this novel the hero is a patriotic misfit in the affluent, liberal society of the early 1960s. No eternal values exist, all is relativism and materialism; this the hero learns when trying to advocate his inborn creed of eternal values. Then the guy is translocated to a fantasy world where he comes into his own, a world that makes sense to him. A world where he can wield a sword and lecture a young man on the importance of willpower, drive and perseverance. Eternal values!

The first half of this novel is just great, with the real-world setting and the first person-narrative of a Responsible Man finding his way in life, struggling against a nihilistic, lacklustre zeitgeist.

In Starship Troopers (1959) is delineated a governance uniting authority with responsibility. The "Resonsible Man" is here again, beautifully so. And this figure educating the reader returns in many a good Heinlein novel, like Starman Jones, Time for the Stars and Space Cadet. The latter, from 1948, is a delight in the first chapters, condensing what responsibility, self-restraint, ambition and loyalty means, all within the framework of complex operations like commanding a ship. The whole story tells us what this means, in the future and now and forever.

Thus Heinlein educates the readership in book after book. It's true that this Responsible Man voicepipe takes some time to get used to, this somewhat "lecturing, hectoring" voice in Heinlein's books -- but -- I have personally grown to like it after 30 years of reading the man. And so have many others. Even Philip K. Dick, hero of the 60s "New Wave" of sf, considered Heinlein the master.

That might have been in the general, story-telling ability of the man -- but -- you can't, as mainstream critics often do, divide the Heinlein stories into (1) "mere good storytelling" and (2) "deplorable right-wing lecturing". The storytelling and lecturing merge to form the Heinlein opus, an inseparable holistic phenomenon.

Thus, almost all of Heinlein's fiction from the debut in 1939 up and until Glory Road of 1964, maybe even including The Moon Is a Harsh Mistress of 1966, are great reads. This is excellent conservative sf and also, when the lecturing takes the back seat, great sf entertainment in general. All of the 1939-1966 Heinlein opus, the novels and the short story collections -- in all about 30 books -- are worth looking up for the radical conservative reader.

Heinlein takes pride of place in my essay, Science Fiction Seen From the Right. Chapter 1 is entirely about him, delineating the conservative slant of Assignment in Eternity, Coventry, Time for the Stars, Glory Road, Space Cadet and Beyond This Horizon. Also, there's a short Heinlein bio in it. Then once again, at the end, in Chapter 32, I look at the subject of "sf and war" and in this Heinlein has a lot to say, not only in Starship Troopers and Space Cadet but also in Sixth Column and The Man Who Sold the Moon, both works teaching us about how to run complex organizations with sizeable staffs.

All told, Heinlein is the portal figure of my book.

So, you can say: Ursula le Guin wrote about socialist utopias. Heinlein fought against them. There you have Science Fiction Seen From the Right in a nutshell.