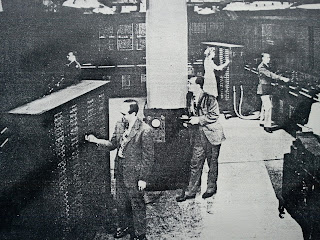 
I sometimes read books. Hereby some of my latest encounters.

. Cordwainer Smith, The Rediscovery of Man: sci-fi as fairy tales, stylish and a bit weird but overall impressive.

. John Wyndham, Stowaway to Mars: a story of a Mars trip, written in 1935, playing in 1980, offering the reader adventure and heroism, kind of "middlebrow": well done but rather meaningless, like all Wyndham stories. It should be noted, though, that it's a bit more upbeat than his postwar fiction where doom and gloom is the order of the day.

. Wolfram von Eschenbach, Parsifal: good to have read the main part of it, takes a little time to get used to the style. A classic to return to. In this vein I also like the Mabinogion's Peredur story which might be of a later date but has more of a primordial feel to it.

. Hans Holmér, Loppan: in Swedish only, a fine police procedure story by a guy who was police chief of Stockholm when PM Palme was shot dead in 1986. In the ensuing criminal investigation Holmér's way of conducting it was criticised. So, when Holmér began writing crime fiction in 1990 no one, but no one, believed him in this new role. However, with time it has become evident that he had considerable writing talent, well suited for police fiction. He had a modicum of wit and charm in his (admittedly not uplifting as such) stories of low-lifes, junkies and serial killers. The thing of it is, he knew police work and the "operational jargon" of the book is what makes Loppan into a good read.


The picture is showing an early kind of computer.