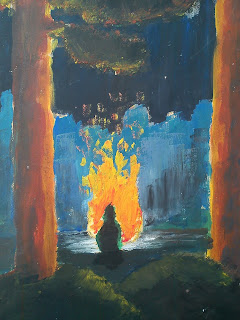 The old Hindu hero Dhritarashtra also perishes in this way, by internal fire. This we read in Bhagavata Purana, 1.13.

In other words, I guess you could say: I am the fire from within, / burning up this mortal coil... / I am the eternal golden flame, / burning all materialism to ashes – / consuming everything, leaving nothing behind, / blown away, outta sight, in one stroke... / Matter is energy, E=MC2.

One of the first pop songs I remember hearing is Fire with Arthur Brown (1968):