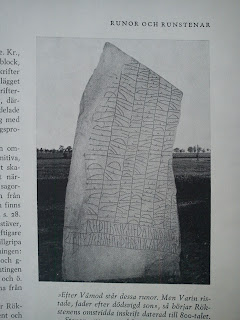 This is a blog post. About the vital force in man.


Intuition, inspiration, inebriation. "Movement as a state," as I speak about in Actionism.

This is what I come to think about today regarding "action as being," regarding living, regarding everything.

It's about Od-Svipdag fighting his way to the underworld, returning to Freya in Asgard. As such, this is one of many representations of the “vîra-valkyrie pattern”. And, most fittingly, the Icelandic word “odr” means “divine madness, frantic, furious, vehement, eager” – and also, “mind, feeling” and “song poetry”. That is, a concept for astral war as astral art, “the spirit of song is war” as Södergran said. This is the astral fight as “inspiration and inebriation,” of fighting in a trance, led on by an image of the beloved, as was the driving force of Parsifal.

Od was Freya’s husband, mentioned in the Edda as a man who left her and then never returned. But, in Our Fathers’ Godsaga, Viktor Rydberg connected Od with another Edda figure, the elf Svipdag, who in the narrative poem “Grougaldr” goes off through the underworld and (in “Fjölsvinnsmal”) reunites with the Goddess of Love in Asgard-Agartha's sublime pastures.

Interestingly, Od has been connected to the chief Asa god Odin. And why not. Odin is the god of “war, poetry and ecstasy,” of shamanic song and the din of battle. And German Scholar, Baron Carl von Reichenbach (1788-1869), conceptualized the vital energy of man as the Odic force. It’s the same as Egyptian Ka, Hindu Prâna and Taoist Chi, though, with a western European slant.
As such, the Odic force can be both negative and positive, fruitful as well as damaging. You have to rein it in, take responsibility for its power, a power you as a human being have within. Use it wrongly and be damned, use it properly and be a god-man, a Sonnenmensch vîra.

The Odic force is for real, Odin is for real, Od-Svipdag searching Freya is real. Inspiration, inebriation, initiation, and all in one and one in all.