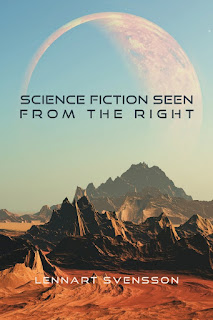 My new book is out now on Amazon. It's a massive, book-length essay about 20th century science fiction and fantasy. "[W]ith a title like Science Fiction from the Right, one can consider this an automatic purchase for anyone on the “Alt Right.”" -- James O'Meara on Counter-Currents. -- Buy the book on Amazon. Buy the book on Adlibris.


"Science Fiction Seen from the Right" is now to be bought from an internet bookstore near you. This study examines 20th century SF and fantasy, focusing on works having a relation to eternal values like faith, responsibility, duty, honor and courage.

This is the angle employed. This is what you might call a conservative, traditionalist way of looking at SF. Otherwise we always hear from leftist pundits that SF is a genre about change and that no eternal values exist.

The chapters of the current book depict American and European authors like Heinlein, Frank Herbert, C. S. Lewis, Tolkien, Jünger, Boye, R. E. Howard, Lovecraft, Borges, Pournelle, Dick, Bradbury et cetera. In addition, there are chapters about the development of the genre and a look at comics, films and specific themes such as nihilism, history and war.

Some quotes from the book could come in handy. For instance, this I say about Clarke's "2001":


This is more than literature, this is an initiation, a raising of man to a higher level -- the next level, the space-faring, alien-encountering level. -- What made Childhood's End fail is here rectified; 2001 intimates that man has to be on a higher mental level, on par with the space-faring aliens, to be able to meet them, encounter them and meaningfully communicate with them. [p 124]

And this I say about Ray Bradbury:


We all know that Ray Bradbury (1920-2012) was a man longing for years gone by, for the American 1920s with T-Fords, striped cotton suits and icecream sundaes. But this kind of sentimentality can’t be tolerated in a study like this. Tradition isn’t about being sentimental, it’s about acknowledging Eternal Values, values that still can lift us, inspire us and guide us, offering an alternative to the current materialism and nihilism. For in essence, sentimentality is a form of nihilism. Therefore it takes some time to sort out the Bradbury stories having to say something to us even today, stories about Faith, Musicality, Awareness and Courage. [p 299]

The following is another take on the subject of nihilism in science fiction:


[N]ovels like Gene Wolfe’s The Book of the New Sun (1980-1983), Sam J. Lundwall’s No Time for Heroes (1971) and Harry Harrison’s Bill, the Galactic Hero (1965) are all rather enjoyable, the first for its accomplished style, the latter two for their drive and wit. -- That said, to have an executioner as main character (Wolfe) overall leads out into nothingness, as does the banterings of the other two, I figure. A hero is led by Will, Truth and Compassion; an antihero is a symbol of the opposite, of decadence, whose core concept is nihilism. If you accept that, then these books can be estimated at their true value. Just don’t come and say that they’re some kind of alltime, essential classics pointing the way ahead. For this some embracing of ideals is needed, some spiritual elevation. [p 332]

The following I say about J. G. Ballard:


The strategy he [= Ballard] used is called "Death of Affect as an approach to character". Because, in the usual prose story the reader is manipulated to sympathise with the protagonist. Syrup is smeared over the dish. Ballard, in contrast, is disconnecting such sentimentality. He portrays his characters with some emotional distance but thus manages, paradoxically, to have them come closer. He doesn't manipulate, he portrays. [p 144]


A portal figure of the book is Robert A. Heinlein. In chapter one I for instance say this regarding his topical fiction:


The ideals of olden times are still viable. Self-restraint, self-reliance, responsibility and nobility of character must be remembered and imparted, again and again. And in his 1950s novels Heinlein did just that. [p 16]

In other words, this is what you get in "Science Fiction Seen From the Right" -- a venturing out into the vistas of wonder and glory, traditional style.


Related
The Book Reviewed by Counter-Currents
Red Ice Interview About the Book
Heinlein's Role in the Study
Presentation on the Publisher's Site
Buy the Book on Amazon
Buy the Book on Adlibris
Upplagd av Svensson kl. 04:03