A Memory of Robert Svensson, My Brother 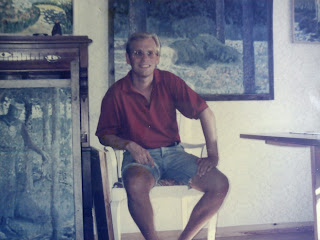 As always this blog is written by me, Lennart Svensson. I have a brother who recently passed away and these are my memories of him. A Swedish version of the text is to be found here. -- The burial ceremony itself was held at Kärlekens kapell, Arnäs kyrka, on April 28. I was there and it was a dignified ceremony. One detail: it was a grey day but halfway into the ceremony the sun shone through. And this was no coincidence, I say as the mystic I am.

Robert was 52 when he died. He was an artist, a painer in aquarellle and oil on canvas and privately active as a draughtsman (pencil, ink). He was educated at the art department of Wik Folkhögskola for two separate years (1984-1985; 1986-87). In the 1990s he had exhibitions at Galleri Dombron, Uppsala, at Café Mannaminne, Nordingrå and at his own Galleri Söråsele, Åsele, to mention the most important exhibitions.

He was an artist at heart, a born creator of pictures. It’s true that he also was a rather fine writer; for instance, when studying at Uppsala university in the late 1980s and 1990s writing essays and papers came easy to him. However, I’d say: writing was a game to him but pictorial shaping was serious. He lived and breathed all the aspects of painting and drawing, pondering nuances and coloring, the color of the sky, the color of shadows etc. etc.– as well as different styles of drawing comics, of composing frames in movies et cetera. For instance, maybe he told me or I told him that David Lynch’s TV series Twin Peaks was filmed in studios with ceilings, inner roofs, making the scenes more homely, a feature absent in all the other TV dramas and comedies since way back.

Such a feature, watching TV and noting how the scenography was composed, this could occupy him endlessly. He was something of a glorified loiterer and saunterer, having a hard time to get going with some projects. ”I’ll get into it, next day, I promise” he could say. And yet he did deliver, like the covers he drew for my Swedish novels Antropolis and Till Smaragdeburg. I envisoned the layout and he implemented it, doing fine lettering and adding drawings.

He had his lazy traits but he also was a go-getter, taking charge. Like leading his rock band the Neurones in the 80s and 90s. They performed live here and there and did some demos and recordings, like having a song on a Spanish anthology album. When googling it now I can’t find it. However, the point is that when leading his band he could ”point with the whole hand” and be a musical inspirator and leader at the same time. He played guitar and sang and career-wise it didn’t lead that long but the demos (I still have copies of them, some 10-15 songs) had a lot of flair and pizazz. He was a musical man, a man led by the Muses, the Greek gods of poetry, song and art.

He also liked ro read (Tolkien, the odd sf tale, fairy tales, books on art, comics) but his main interest along with art was music. With a basis in new wave rock and pop he also cherished jazz, ambient and whatnot, even the odd Swedish dansband song and heavy metal song. Subsisting on his paper route work he could ”waste” away his days by playing records, drinking coffee, drawing...

As for me and Rob (as he was called) we were rather close from our early childhood and until about the year 2000. When we were young we played with cowboys and indians and toy cars, we drew and played games, we assembled plastic models, all of it having some aesthetic quality, that of appreciating the very layout and feel of the game, or, that of building dioramas and giving an illusion of reality, a constant art project going on for ever – like, I’m personally still at it, writing novels that are some sort of conceptual dioramas. 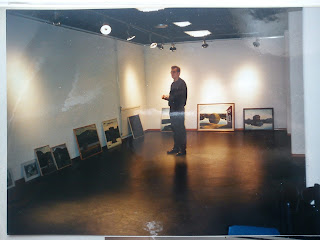 We lived in Övik, Ångermanland where we went to school, and then in the late 80s we reconvened in Uppsala where we both studied and had our respective student bedsits. The meetings we had during these years could be rather far apart, however, in some ways they were essential, we bonded, we inspired each other with that odd line or fact. Then, after the millennium, we kind of drifted apart. Not that I critisize him but at the end he became rather lethargic, like not answering letters.

He died of a stroke and he experienced a slight stroke last year too, this could be an indication of his general state. I wouldn’t say he faded away, he did work with his paper route to the end, distributing morning papers to homes with his bike and for this you need some condition. However, he became a bit aloof, a bit ”dormant” at the end.

I still think of him every day, as I’ve almost always have. But we’ll meet again, that’s the logic of reincarnation, ”no meeting is the first, no goodbye is the last” as Dénis Lindbohm said. The soul is energy and energy can’t be destroyed, only transformed into another physical state.

Robert liked westerns, the wild west myth as an iconographic phenomenon; to us being born in the 60s westerns was a staple diet in comics, films and TV series. A favorite comic of his was Lucky Luke, a French western comic series. And when I inherit Robert’s Britains Deetail figures, 54 mm cowboy figures, I will think of him. They will be constant reminders of his being, a kind of memorial statuettes.

When building plastic models his favorite was planes, WWII planes. He had an aerial trait – for in additon to this, he wrote his Bachelor of Art degeree paper about the bird paintings of Swedish artists Lars Jonsson and Gunnar Brusewitz. And my father said that, in his last phone conversation with him on March 26, Robert said that he would go out later and look at the birds. In spring the migratory birds return to Sweden, the snow-free and drying, soon-to-sprout lands, having some wealth of birdlife.

He’s standing in the Uppsala plain, looking at the birds... a worthy image of the man he was. ”I’m far, far away, with my head up in the clouds...”

Robert's favorite pop band was Echo and the Bunnymen.

He liked the memoir books by Swedish artist Peter Dahl. Robert wasn’t so much into Dahl’s art per se but he liked the way he told of his artistic career (Kanske konstnär etc.). Specifically, he appreciated Dahl’s lifelong project of creating a fantasy land with his tin soldiers, toy cars, model railroad and model houses, the land ”Caribanien”. This, Robert meant, was Dahl’s masterpiece (in the realm of conceptual art), his oils and litographies were not as memorable.

Robert was a blond, Nordic guy, about 178 centimers tall, of a somewhat compact build. He was a man of the ”pyknic, athletic” type, not the ”leptosome, slim” type like me. We indeed looked akin but we were of different somatic models.

I mention his overall look because in my nove Antropolis (2009) I have a chapter where the main character meets up with the artist Tim Parill. Parill’s look is made up, he’s a fiction as such, but his behavior as a distraught artist receiving a guest in his studio is very much based on Robert:


In one of the segment houses lived Parill. Once up on the fourth floor, I entered a bright, lofty atelier, a real studio unlike my own that was just the upstairs floor in my house. A smell of turpentine and oil struck me. I found the master himself seated at a table reading Antropolis News. – I bowed slightly and sat down, Parill nodded and stood up. (...) He offered wine, toasted me and asked if I would buy anything – but when I said no, he continued to read his paper. I took the opportunity and looked around in the studio, a spacious room with a ceiling height of three meters. A window only to the north; thus it must be for a painter, this I knew, because the light from the north was smoother than the saturated, flowing, over-the-whole-day-shifting southern light. Everywhere sat canvases; they were both landscapes and abstractions and some individual portraits, all of it unmistakably Parill. There was colorism and rich layers of paint, there was the play of forms, there were power lines meeting and parting, there were foaming streams, dark jungles and psychedelic meadows.

After a descriptions of odd objects decorating the studio we have this image of the artist, ”very Robert” if I may say so:


Parill sat and stared into the air. Dust particles danced around in a sunbeam. Then he suddenly got up and went to his easel. From a hanger he picked up a painter coat, black and full of color patches in quaint randomness. He wiped his fingers on it while he painted. – I glanced at the canvas, a landscape with a few houses next to a lake and a sun over some mountains on the other side. (...) You could see yellow fields and shady houses, a copper green lake and a blueberry sky. From a tube Parill pressed out some paint onto the palette and seemed to have forgotten my presence. He picked up a brush, approached the canvas and started working at the shadows cast by the houses. He put on green and blue, crossing the brush strokes and having the colors blend. ”Shadows are never black,” he said. – I agreed to this wisdom, bowed and headed for the door.

Robert was a fascinating guy and I could go on telling about his peculiarity. However, in light of what I've already told I guess that a sample of his artworks is the best way to portray him. He was my brother and he's still alive to me, I've intimated it above and now I say it again. And above that, his art lives on. Judge for yourselves.

(All the paintings below are in private collections. Click on each picture to get an enlargement.) 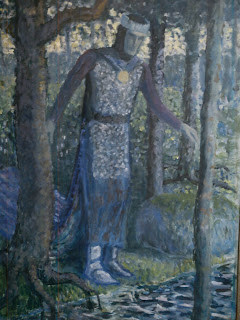 "The Knight and the Brook" (oil painting of a medieval knight coming to a brook in the woods). 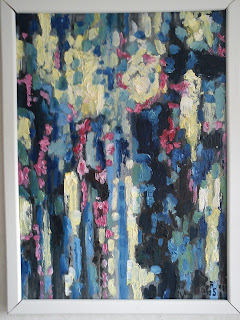 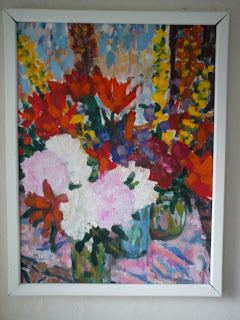 "Still Life" (oil painting of flowers, rather much in the impressionist vein). 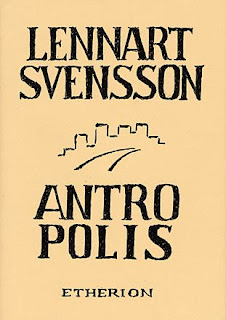 Cover of "Antropolis," executed by Robert. 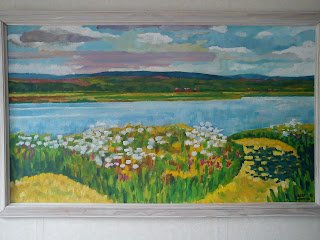 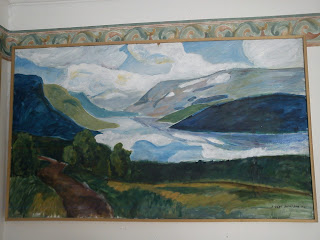 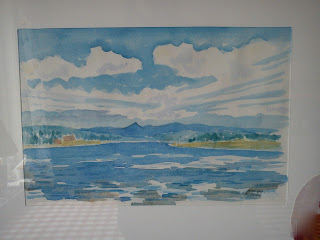 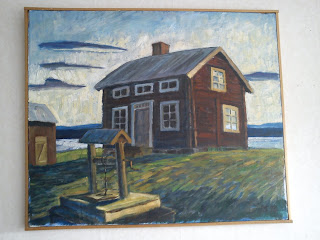 "Sunset" (oil painting of a Norrlandic house, the motif as such is made up, not being a "real life" motive).


The top picture is of Robert sometime in the 1990s. The next picture shows him at Genebiblioteket in Övik, hanging pictures before an exhibition, same decade.