An Interview With Lennart Svensson, Author of "Borderline" 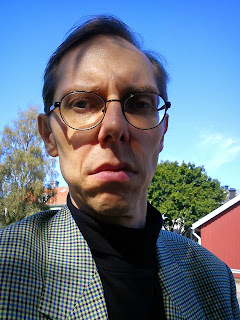 This is an interview. Technically I conduct it with myself = an auto interview. The focus is on my works, past and present.


Q: Can you state your name and place of birth?

A: I do. But as Ernst Jünger said, "spirit has no age". So I'm not indulging in being this or that age. I simply am.

Q: Speaking of Ernst Jünger you published a biography of him in 2014. Comments?

A: None, other than that the book is still to be bought. From a creative point of view I knew the subject, Jünger, I enjoyed writing the book and now my fellow brethren and sistren can read about Jünger and be amazed and intrigued, being led to spiritual clarity.

Q: Spiritual clarity indeed. Your essay "Borderline" is receiving coverage here and there these days. Like this review on Heathen Harvest.

A: Indeed. They even seem to like the book.

Q: Why is "Borderline" so important?

A: It's a beacon of hope for a culture bogged down in relativism and nihilism. The science community of today advocates reductionism which is absurd; holism is the only way ahead. There has to be an element of metaphysics in physics, otherwise it gets totally unintelligible. That's what "Borderline" is about -- as well as being a strategic overview of Plotinus's eidetic, "ideas-based" ontology. I also discuss how his followers brought the doctrine into our times, followers like Goethe, Ernst Jünger and Hugo Fischer. As Fischer has demonstrated, Plotinus can teach today's scientists a lot about metaphysics.

A: No. In addition to this, "Borderline" tells about holistic ethics, how to act as a human being given that the world is an organism and not a machine. Man is not a robot; man is a microcosmic organism mirroring the organic macrocosm. Man has will, thought and compassion in his being and in the book I teach how to acknowledge this. Also, I speak about literature and art in this respect, depicting people like C. D. Friedrich, T. S. Eliot and Edith Södergran and their holistic opuses. Ernst Jünger also gets a chapter; he's referred to throughout the book and specifically, his approach to "life, universe and everything" is covered in chapter 25.

A: This is a study summing up 20th century science fiction and fantasy, seen from a conservative point of view. Now, it doesn't cover every author in the field, not even every author having once held some conservative view. However, it does cover a lot regarding an overview of the field from a traditionalist standpoint. Authors like Heinlein, Herbert, Lewis, Tolkien, Bradbury, Pournelle, Niven, Dick, van Vogt, Howard, Lovecraft and Clark Ashton Smith are covered, along with Borges and Castaneda and some additional names like Moorcock and Bradbury. Even Ernst Jünger gets a chapter...!

A: He is, when there's reason to mention him.

Q: Apart from this, the conservative angle, what made you write the book?

A: It was a labor of love. I mean, I do have a polemical message with it all, an errand of snatching back sf from leftists and Social Justice Warriors who currently seem to occupy the genre. The conceptual-political battle is raging and I'm on the right side. That said, the book is also about the wonder and glory sf and fantasy give us, about ideas and visions, about fantastic stories in the realms of future lands, lost worlds and parallel demesnes. I've been reading sf and fantasy for over thirty years and this is my report.

Q: And the future? Of your operation at large?

A: I can give no details but I currently write this and that, both works of fact and fiction.

Q: But as for fiction, you have already published novels?

A: I have. In Swedish I've published the novels "Antropolis" and "Till Smaragdeburg". Here's a presentation in English of "Antropolis".

Q: In Swedish, you say. Those books were published in 2009-2010. Since then you've written and published yourself in English. Do you still consider yourself a Swedish author?

Q: Briefly, the world situation at large. Are we in for it? Is this the end?

A: No, of course not. There's no risk for major war as this link will tell you. The world might seem a mess right now but the forces of Light are advancing. The Russian leader Putin has done a lot, in intervening in MENA 2015-2016, to rectify the situation. He might not be a saint and I don't support his every move -- and I remain being a SWEDISH nationalist -- but he is on the good side. The Westworld, for its part, is enmeshed in evil. With the US as a linchpin it's a corrupt regime in need of reformation and this will also come about, on legal grounds and not with an all-out shooting war. That's what I see before me. The fear-based thinking has to give way to a more constructive approach.

Q: Constructive? Isn't there a propaganda war raging, isn't this a time to fight and not to build?

A: OK. I mean, the situation is dire and we need to stand firm in opposing evil. But the situation isn't as bad as many internet pundits, even on the right side, seem to think. A war it is but it's a propaganda war and a frequency war -- thus, tune in to your own frequency and don't become dejected by reading false visions of a looming war. Stand firm in your personal being, employing "C3", that is, meditate and be "calm, cool and collected". A man who controls his breath controls the world.