This I Blog Today 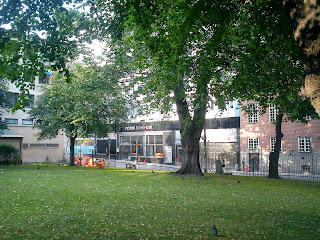 I'm a poet. And my latest poem sounds like this:


Have no fear, just believe.

Have not fear 'cos I am here.

Be still and know that I AM.

More than being a poet I'm a writer of novels. Therefore, I often play around with novel titles. And my latest batch of "novels waiting to be written" are:

The Nightfighter; Vittra -- Resurrection; The Destiny of the Universe, Part Three: Stellar Harvest; Rants of a Neurotic Dandy; Ecstatic Trance: The Way of the Manic Guru; Do You Have What We in Sweden Call "flamskyddsmedel"?

It's autumn. Leaves are falling. And why not.

Mankind must put the divisive, quantified, dualistic paradigm behind it and settle for a science shaped by wholes, health and wholesomeness.

We must usher in an era of spirit science, aiming at expressing one world – unus mundus.

More of this paradigm shift in my essay Borderline.

Art is the creation of gold through the alchemy of time and thought.

. Parzival by Wolfram von Eschenbach. A fine Gral story, imbued with pious-spiritual feeling. "You can't win the Gral by force". No, your name first has to appear on it. Which is what happens to hero Parzifal after a long process. -- The foreword and afterword by translator Hatto are rather useless, focusing on technicalities. You must go to Evola and Serrano to get some sense out of the book. For instance, Hatto means that Eschenbach has construed the Gral to magically supply food and drink for the Monsalvat knights in order to not having to have peasants in the story! How utterly insane an interpretation of the supernatural features of the Gral. The poverty of reductionism.

. The Rediscovery of Man by Cordwainer Smith. SF stories by an American who died in 1964, still fresh. Linguistically these stories are a kind of "Heinlein meets Gene Wolfe meets Douglas Adams". Indescribable. Hard sf with human interest. -- I have the SF Masterworks edition, a reasonably fine edition.

. Short stories and poems by Swedish author Mika Henry Tenhovaara. I find them in old fanzines and they are generally great. Surrealism, wavering reality, a tinge of occultism; it's hard to get that working but MHT just had it. He was born in 1963 and published one (1) book (in 1987, "Y -- en berättelse") before he stopped writing. Artistically "done" while still rather young, like Rimbaud quitting writing altogether after an early "peak period". Nevertheless, a real author genius, his work coming through like a kind of revelation.

The future’s going to be nationalistic, small scale, smart tech and spiritual.

Of having the divine angle in art, Richard Wagner said:

More about Wagner in this book.

He who doesn't carry divine seeds will never give birth to a new world.

And so it goes.

Photo by LS: view from the surroundings of Klara church, Stockholm.