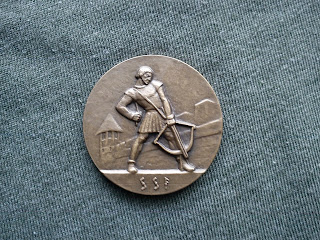 Hereby some reading tips. The theme is German Classics. Enjoy. More of the same for instance in this post.

Nibelungenlied – The 13thcentury epic in rhyming verse form is actually a good read. I mean, personally I first thought that the old Nordic version of this, the Volsunga saga, had it all, that this was Sigurd in his best form. But the chivalric high German version is also well worth the effort. Especially the climax when the Nibelungs fight to the death at Etzel’s castle. Among all the chivalry, rhyming and song it has got veracity.

Martin Heidegger: Being and Time (1927) – The style of this treatise might be a little obscure. This is NOT an easy read. But if you prepare yourself before reading with some Heidegger handbook you will find a viable existentialist philosophy, an ethic that includes DEATH as a cornerstone. As in Actionism the limited lifespan of the physical body is accounted for; thus it has to be in any ethic treatise worthy of its name. Heidegger does just that, he acknowledges death. He doesn’t shy away from it. Specifically he has the concept of Sein-zum-Tode, “being-in-death”, the case of constantly being conscious of your body’s lethality. – The book is aimed at a philosophically schooled reader; the style, even when it’s understandable, gets a wee bit academic and dry. But if you’re into academic philosophy trying to say something viable about the total existence of man in an atheist age, then Being and Time might be for you.

E. T. A Hoffmann: The Mines at Falun (1819) – A short and concise story of a sailor going ashore, finding a job at the copper mines of Falun, Sweden. Fast moving, tragic but non-tragic, a little like Poe in style and attitude; a fine example of early 19th century weird fantasy. Based on a true story, that of the body of a man killed in a Falun mining accident falling into a pool of sulphuric water, preserving his body for decades before being detected.

Friedrich Schiller: Wilhelm Tell (1804) – A good read! Believe it or not, this one has charm and style. Medieval Switzerland, freedom versus tyranny, in sharp and fiery scenes. -- Schiller’s plays can both be enjoyed in book form and on the stage. Another rather fine play of his is the Wallenstein trilogy of plays. Into English it was translated by Coleridge. Here is an online version of that trilogy.

Actionism -- the Next Big Thing

World History by Me