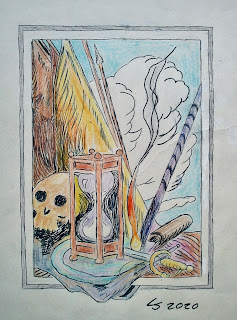 We have a little historical series going at the blog. It began here, with an Introduction. And it continued with the Egyptian etc. Bronze Age and with Ancient-and-Medieval Times. Now for the conclusion, about our current age, the Faustian Age.

And so we come to our own age, the Faustian age. A summation of it would sound like this:

The star sign – Pisces – is reflected during this era in that the symbol of Christianity, the dominating religion, is a fish. It was because, in early Christianity, the fish was used as a secret symbol for this sect, à la ICHTYS = Greek for fish, and then taking each letter to mean Iesous Christos Theou Yios Soter= Jesus Christ, Son of God, Savior.

The biotope of the era is Europe, with the heartland in the parts of Europe beyond the limes of the Roman Empire. Now, we admit that southern Europe with Italy and France etc. of course still is important – but that extra little Faustian essentiality is only present in virginal lands, lands more untouched by ancient civilization like Germany, Scandinavia, and the UK.

As for the era in general, like any era the Faustian epoch is just there, seemingly perfected, from the beginning, thriving under its ascending star sign. For in the 1400s we immediately see painting with central perspective, marine exploration venturing beyond the confines of the antique world, and the beginnings of the heliocentric worldview with Copernicus, born in this century.

We see the end of the previous, antique empire in the fall of its capitals, Constantinople in 1453, Rome in 1527; from now on, the main focus of history will be north of the Alps, primarily in Germany, France, and the UK.

What way of transportation to symbolize our age is a moot point. We have chosen the rocket because then we have covered anything from firework rocket to spaceship. But the Chinese invented the former...? Indeed, but they didn’t transform it into the latter and go to space like Gagarin and all the rest of the Faustian ilk.

Again, let us look at the beginning of the Faustian era according to Steiner. He means that it began in 1413. And the portal event of that year is the birth of Jeanne d’Arc, the young woman who became a driving force in liberating France from British occupation; celestial voices called on her to liberate her land, God is a nationalist…! And then she went off to do just that, fighting and defeating the Brits so that a turning point in the Hundred Years war took place. Soon the enemy was in full retreat and the war ended in a French victory, a liberated French land. A miracle indeed.

We ourselves find this very illuminating. For, again, letting our era Steiner-wise start in 1413 also means referring ancient-and-medieval times into the same, preceding era. They go together well with their dharmic, placid, all-imbuing feeling of unity, of ataraxia, of lack of striving. They are the past; and 1413 becomes a reasonably distinct start for the current era of striving and national specificity.

Jeanne gives birth to nationalism. Other nationalist symbols of the 1400s century along with Jeanne were, for their part, Jan Hus in Czechia and Engelbrekt in Sweden (and, somewhat earlier, maybe Wat Tyler in England too). They paved the way for subsequent national awakenings, in the Faustian heartland of Germany eventually symbolized by a figure like Martin Luther.

Luther was the first German nationalist; many aspects of him prove this. For he translated the Bible into German. He advocated German specificity versus Catholic universalism. And he enabled separate rulers to decide if they wanted Protestantism in their realms (cuius regio, eius religio). Even Spengler noticed this nationalist tendency of Luther, seeing in him a German, folkish upsurge against Mediterranean imperialism.

National states, with Lutheran state religion, are symbols of this Faustian nationalism: Sweden, Denmark, the Prussian Ordensland and other German lands, Great Britain… – France, while remaining Catholic in the form of l’ancièn régime, also developed into a kind of national state, soon with the ambition to dominate all Europe.

The 1400s sees an emergent nationalism. And this era also sees a new feeling and mentality in many other fields.

In art it is expressed as central perspective and increased realism.

In society in general it is seen as an eagerness to break the bonds of medieval society, like venturing out beyond Europe in sailing ships: Vasco da Gama, Columbus, Magellan...

Even in everyday society the Faustian age sees the emergence of a new, restless striving, a restless industry, symbolized by church clocks sounding not just the hour (Italy, 1300s) but the quarter too (Nuremberg, 1500s).

The central perspective for its part gave rise to the boulevard. Antiquity and medieval times did not see these long city streets trailing off into the distance. We might for instance think that ancient Rome had a major parade route, like the one we see in the film Gladiator (2000) with military units parading along a vast perspective avenue, but this is not historical. The RomanVia Triumphalis taken by a triumphant field commander was a rather narrow and circuitous lane. – Pre-Faustian times had no sense for “the striving for the horizon”. The Greco-Roman era went for unity, neighborhood, cities closing in on themselves. Conversely, it is the Faustian era that breaks all bonds and goes off on a tangent on Champs Elysées, Sunset Boulevard, Sveavägen, Unter den Linden...

This connects to the new sense of the landscape.Quattrocento art and then Dutch art have the horizon as an integral element, the famed place where space becomes time. This Spengler says in his magnum opus and it says a lot. Ancient-and medieval man (and Asian man) didn’t strive for the horizon like Faustian man does. And if the Asian does it, it is not the same; with Spengler’s term, it is then just a pseudo-metamorphosis. Like, Asian man may be bitten by the Faustian bug of having to build cars, super highways and even spaceships, but does he have it in his blood...?

Strive for the horizon, strive for the future... The preceding era had its ideals in the past: the golden age, followed by successively worse states. But the Faustian mind reconsiders this by placing the ideal state of being ahead in time, in the future.

Thus, Faustian man may reinstate the paradise by sheer development...

If this concept is seen with a sense of life, of vitality, of willpower-and-vision, this is perfectly viable. The Faustian era still has a thousand years to go and in that time we can do almost anything.

The nationalism, the passion for time-measuring, the striving toward new lands Beyond the Beyond, an emergent striving for the future – all this marks the 1400s as the beginning of a new era.

Conversely, the year commonly held as the end point of Ancient times, 476 CE, is rather inconsequential. We have said it before and we now say it again. 476: Rome went under then, they say, but the West lived on like before. That is, the same mentality kept ruling the minds – the ideal of ataraxia, of the human body at rest as the ultimate goal; the mentality of the circumfluvial focus of the Mediterranean, of one common culture, one religion, no venturing out beyond the Pillars of Hercules. That is, the mind of the culture begun some thousand years before, in about 700 BCE.

In Man and Technics (1932) Spengler depicts how the West ascends to mastery of the world, only to lose it because of greed, materialism, and extravagance.

But wait a minute – he spelled doom for us in 1932 but we haven’t gone under yet. We have managed “the convergence of catastrophes” like war, environmental threats, overpopulation etc. We still have problems but they are manageable. We won’t go under. Someone saying that, someone preaching Untergang is just a defeatist, a mock-ancestral voice prophesying doom and gloom.

Indeed, Spengler had a point in seeing materialism as a threat. We need to remedy us in that respect. We need a paradigm shift towards spirituality; we need re-sacralization. However, it can come about within a Faustian context. “Spengler remedied by Steiner” is the conceptual recipe, as seen in this study. The West, injected with a shot of spiritual power, is the way ahead.

As we said in the Introduction, it’s about integrating the “Atlantean,” intuitive, spiritual state with the rational, sober attitude gained in modern times.

With this merger done the West still has more than a thousand exuberant years to go, a society dedicated to art, science, and spirituality.

Since way back China is spiritually resting on its laurels. As is India, the Middle East, and the Mediterranean.

Why...? – Because they have already built their Empires. They have their shiny world cultures behind them: the Imperial Kingdom of the Middle, India under Ashoka and the Mauryas; the Middle East under Persians and diverse Muslim rulers. And the Mediterranean with its Roman empire.

But the West, Europe beyond the pale of what was the Roman empire, is still hungry. The West is still impatient...!

You might abhor this unrest, this system-immanent striving, this constant aiming at the horizon. But it’s in our blood, and we are living it. We are still building our empire. The Faustian era will last until 3573.

And if you get tired of this constant striving, then – we suggest – you can apply the Actionist strain of Movement as A State of Mind. Of Rest in Action.To rest by being active. That’s the Western way, the European way, the Faustian way. Conversely, we get unruly when too long in passivity.

We explain these concepts (MAASOM; RIA; Action as Being) in Actionism (2017). As for the concept Rest in Action, we borrowed it from Winston Churchill and his novel Savrola. The hero is one active fellow, only finding rest in action... thus, we’d say, he’s a rather typical Faustian hero.

Titles of diverse works summing up the Faustian spirit:

... and songs like Don’t Fence Me In, Endless Prairie, I’m Gonna Change the World…

As we saw in the Introduction fusing scientific rationalism with religious intuition was Rudolf Steiner’s recipe for a resurgent Western world. Another German scholar advocating a similar strain was Walter Schubart, in his 1938 essay “Europe and the Soul of the East”.

The Quattrocento was the dawning of a new era in which Aryan man came into his own.

“A man’s reach should exceed his grasp.” – That’s the Faustian mindset in nuce: constant striving, always reaching for that evasive horizon.

A kind of addendum...

Why do European luxury villas always have a swimming pool? Why is the model holiday always by a seashore? – Answer: the Faustian-European era of today is under the sign of Pisces, a water sign.