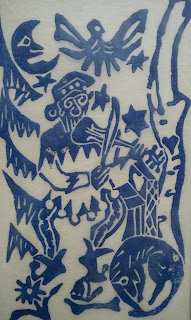 This is an ultra-short piece by Lennart Svensson, the author of many classics. Among them are the essay "Borderline -- A Traditionalist Outlook for Modern Man" (2015) and the novel "Redeeming Lucifer" (2017). -- Now it's time for the short story "The Painter", a stunning event in a social reality.


An artist had painted a picture, a quaint scenery with a path leading off into a pine forest. The brushwork was vivid and the illusion of reality enthralling. In fact, the artist was so pleased with the work that he invited his friends over for a party to admire it. They joined him in his house the same night.

So there he stood in front of the painting, the artist, telling about the work. He was so enchanted himself by its suggestive powers -- so before his guests knew he stepped into the picture and started to walk along the path, turning around and waving as he disappeared into the forest to the soughing of the trees.

The guests were astounded. They started to discuss the disappearance of the artist, however, deciding to remain in the atelier and hang out. And for sure there was some drink left, white wine, and there were crisps: one with taco spice, one with bacon flavour and, la pièce de résistance, ”sour cream and onion”.

So you could say that, after the circumstances, it was a successful evening.


Related
Info about "Redeeming Lucifer"
More Short Stories on this Blog
The New Improved Sun (poem)
Who Are the Ascended Masters?