Who Are the Ascended Masters? -- Some Informal Notes on an Esoteric Subject 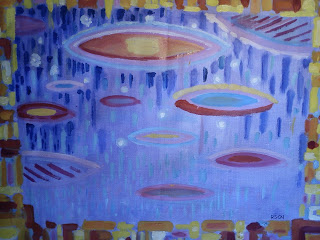 In the spiritual blogosphere we often talk about ”ascended masters”. So then, who are these masters? This is a basic orientation on the subject.


1. Light Winning Over the Dark

There is good and there is evil. Currently the planet is in the grip of an evil cabal (the military industrial complex, NWO, illuminazi). But the forces of Light are, as always, out and about. The dark cabal can’t win. Mankind is walking towards the light, both spontaneously and in a more guided fashion. And in the case of guiding this is done by devas, positive aliens, angels and ascended masters. Mankind is led on by benevolent forces.

This post will focus on the just mentioned ascended masters, who and what they are. When reading channelings you meet them: Saint Germain, El Morya, Djwal Kul, Sananda etc. They are not to be confused with archangels, ”the planetary hierarchy”, sporting names such as Gabriel, Michael and Metatron. These venerable angels I can talk about some other day. Ascended masters, the subject of this article, for their part are human beings, having lived successive lives on Earth, in the process gaining wisdom, compassion and enlightenment by studies, initiations and by simply living a will-powered, conscious life, controlling their every thought and emotion.

With all these glorious lives behind him the master has eventually ascended, risen above the material world to continue his existence in a higher realm -- in Nirvana. Jesus Christ for example ascended at the end of his life (shown in Luke 24:51). And from this higher state he and his ascenced brothers and sisters can communicate with humanity; as glorified gurus the ascended masters are always there to guide us, through channelings (= telepathy) and sometimes by appearing in our midst in etheric form.

The collective of ascended masters is sometimes called: The Great White Brotherhood.

The process of living enlightened lives and then ascending isn’t always one-way. This may be a technicality. However, the ascended masters can, if they so desire, temporally go back for another life as a human being. The venerable Saint Germain for example lived many lives on earth as a spiritual teacher (as for example Merlin, Samuel and Francis Bacon). And in this last life he is said to have ascended on May 1, 1684. However, according to The Summit Lighthouse infosite, this spirit ”sought and was granted a dispensation from the Lords of Karma to return to earth in a physical body.” And now he became what he is known as, le Comte de Saint Germain, mystery man of Europe, master of the Aquarian Age.

But Saint Germain thus returning was maybe a special case. As for living successive lives and then ascending, finally and definitively, the being called El Morya ascended in 1898. His last life was as a Rajput prince, the selfsame El Morya, later becoming a monk and a spiritual master. Before that his series of incarnations sported names such as Abraham, king Arthur, Thomas Becket and sir Thomas More.

El Morya ascended in 1898. And he hasn’t (like Saint Germain) returned in a bodily form since. But as an ascended master he is still active, still in contact with humanity through channelings.

Information about the ascended masters can be gathered from many sources. The Theosophists (the movement founded by Madame Blavatsky, 1831-1891) for their part had a stable connection with ascended masters like Kuthumi and Djwal Kul. Further on we have an institution like Church Universal and Triumphant, founded in 1975 by Elizabeth Clare Prophet (1939-2009). CUL practice the teachings from ascended masters like Saint Germain.

Now, let it be clear: I’m an unaffiliated writer, a free spirit not belonging to any organization or party. But for this overwiev of some ascended masters I’ve for example used the website of this church, labelled The Summit Lighthouse. CUT/TSL is a system of spiritual wisdom applying the teachings of the ascended masters, and as an adept steeped in the perennial tradition I find this wisdom quite in sync with what I’ve learned from the Bible, the Upanishads, Plotinos, Meister Eckart, Goethe and Ernst Jünger. I’m not affiliated with CUT, however, they do have some useful info in this respect.

So then, where shall I begin this survey? The facts about the successive lives of the ascended masters gets kind of massive. But I’ll focus on the five I’ve already mentioned: Kuthumi, Djwal Kul, Saint Germain, El Morya and Jesus Christ.

Kuthumi was an Indian-Kashmirian brahmin, the resident other-wordly master of Madame Helena Blavatsky. In his earlier lives Kuthumi had been farao Thutmos III (ruled 1479-1425 BC), Pythagoras (570-495 BC), Persian magician Balthasar (one of the three magi) and Mughal emperor Shah Jahan (1592-1666). [Thutmos III:s grandson Amenhotep III (ruled 1417-1379) for his part was the reincarnated Serapis Bey; Serapis Bey is another ascenced master, however I will not talk about him today.]

Djwal Kul was a Tibetan master in the Brotherhood of Mahâtmas. Like Kuthumi he was one of the three magi, Djwal Kul having been Caspar. (The third magi, Melchior, was El Morya, see below.)

Saint Germain is one of the most interesting ascended masters, mostly because of his western profile. He lived his successive lives mostly in the western world which makes him eminently relateable to me (I am a Swede and a European).

One of Saint Germains earliest lives was as the Biblical prophet Samuel, the last of the Hebrew judges and instigator of the Jewish kingdom with names such as Saul and David. Then Samuel got reincarnated in Britain as Merlin the magician. There’s some stories to tell about this, but not here. If possible I will return to this subject, the spiritual-perennial side of Merlin, king Arthur, Camelot and all.

In one of his later lives Saint Germain was sir Francis Bacon (1561-1626). Accoroding to the channeling ”Sananda 22-11-13” sir Francis was an heir to the British throne and as a king he would have accomplished spiritual feats, moving mankind ahead. But he was reportedly thwarted in this enterprise by the House of Red Shield.

Francis Bacon wrote ”The New Atlantis” (1624), a utopian tale envisioning a land of enlightenment, piety and communal spirit, a vision somewhat realized in the United States of America. In a later life Saint Germain is said to have been none other than Christopher Columbus, the man who discovered America.

Then, finally, this spirit was incarnated as le Comte de Saint Germain, active in France and America in the late 18th, early 19th century. Well versed in languages he was also a virtuous musician, alchemist and esotericist. He is mentioned in diaries and reports at the time, for example by Roussean and Voltaire whom he met.

El Morya was a Rajput prince of spiritual powers. In his earlier lives he is said to have been emperor on Atlantis (about 220.000 BC). Then he was the patriarch Abraham, Melchior, one of the three magi, king Arthur, Thomas Becket (archbishop of Cantebury, 1118-1170), Shams Tabrizi, the teacher of poet Rumi (Tabrizi lived 1185-1284), Mughal emperor Akbar (1542-1605) and the Irish poet Thomas Moore. Moore among other things wrote ”Believe Me if all Those Endearing Young Charms”. His last life was, as I said, as the Rajput prince El Morya, finally ascending to the higher realms in 1898.

Russian artist Nicholas Roerich (1874-1947) is said to have been a channel for El Morya. Through his master Roerich said that the Tibetan capital Lhasa was connected with Inner Earth and its city Shamballa (source: Joshua David Stone, ”Agartha in the Hollow Earth”). Roerich was a painter of no mean skill as the illustration on top of this entry shows. He was a truly spiritual artist.

As intimated Jesus Christ is also an ascended master. His name now is Sananda Imanuel. However , there are different opinions about this. According to Steve Beckow Sananda is... ”one of the Kumaras from Venus, like Sanat Kumara. He overlit Jesus during the latter’s ministry.” But parallell to Sananda there are channelings of Jesus Christ proper so this might be a technicality. Here for example is a June, 2014 channeling of Jesus: "Jesus via John Smallman".

As for Christ he too is said to have lived through a succession of lives. He had earthly lives before he became Christ. But I won't go into that now.

After giving you this survey of some ascended masters, what is the conclusion?

Personally I find it fascinating to follow the successive, earthly lives of the ascended masters. It’s secret history come alive. It’s like a novel waiting to be written. As intimated it’s a massive amount of facts that develops before you. Solely the 18-19th century life of Saint Germain is ”like a novel” – and bearing in mind that he is still active (active in etherical form, plus being present telepathically by channelings) as Master of the Aquarian Age, makes him a character worth studying.

So I’ll maybe have a closer look at Saint Germain some time, focusing on his early modern and modern actions. Then of course there’s the information about him having been Merlin and El Morya having been king Arthur, both making Camelot into a mystery school, as TSL tells us. And this gives additional depth to an already rich narrative, the Arthur legend. There’s some info on the net about this so this could also be worth following. I’m not promising anything but personally I find this interesting, like reading a fantasy novel with profound, lasting meaning.

And this narrative character of it all is what makes me tick. I mean, in the spiritual community there are different threads, different orientations, like occupying yourself with numerology, astrology, mediation techniques etc. All these are venerable doings but as for me, being an author, I want stories to relate to. That’s what makes the ascended masters angle approachable to me. The amount of information about spiritual matters can be a bit overwhelming at times, so the biographical approach to me becomes a way to relate to it all.


Related
Actionism -- How to Become a Responsible Man (2017)
Borderline -- A Traditionalist Outlook for Modern Man (2015)
(In Swedish) Jordkrönikan, del 1
(In Swedish) Antropolis (roman 2009)