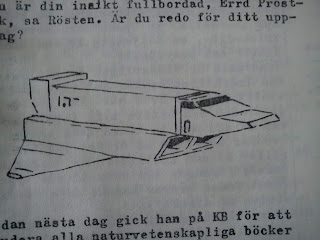 These are excerpts of a science fiction novel. The author of the text is Lennart Svensson, creator of Burning Magnesium.


This is about one guy named Styx Medon, a soldier of a future war. And the war is fought between the Irmgaal Union and the Taurian Empire -- a war beginning in AD 2401 with the Taurian, alien enemy attacking man's interstellar realm, Irmgaal. In this, Styx Medon is tested to the limit and, eventually, rising through the ranks.

In Part 1 Medon is a Sergeant. In Part 2, he's out riding a soaring craft. And in Part 3, he's promoted 1st Lieutenant.

I won't give you any more details. These are just teasing excerpts. Maybe you'll enjoy them.

More in the same vein -- sf stories on this blog -- could be this one.

Medon thanked for the assistance, peeked inside the new corridor and then threw a Q-grenade to be on the safe side. He waited for the explosion and then led the patrol along the smooth, steel-lined corridor. Kind of like in the caves of Memensia of my youth, he thought.

Strange echoes were heard from afar. Finally, the corridor led them into a vast chamber, a large hall with walls in silvery white, concrete grey and sandstone red. There were screens of polypropane, instruments of monometal and monel plastic, tarpaulins of isometane fiber and cantilevers of diffusion steel. Medon sent his people securing the premises with himself going up a ladder into a cupola, looking out through the prisms and seeing a group of A-20:s hovering in the skies above.

Medon and Knake flew in a C-30 over the northern outskirts of Giuffria. They were going to 3rd Division HQ for a briefing. Down below they could see wrecks of Taurian rectangle craft, bombed out woods and the advancing columns of Irmgaal.

“It’s the rest of the breakthrough,” Medon said to his deputy. “We’ve penetrated the Taurian lines here on Balta and made the enemy fall back.”

“Then we’ve approached a fortress called Serlingue, a strongpoint in the enemy’s second line of defense.”

“And where are we heading now? The two of us, today?”

“We are heading for an HQ to be briefed by General Syntag.”

They sat opposite each other by a porthole. Suddenly Knake got sight of an enormous crater in the terrain. He pointed towards it and said:

Medon looked at it, pondered and said:

“It must be from the orbo before the landings.”

The crater was about two kilometers in diameter, a giant kettle being bombed out by a 1,000-ton lump of steel. This block had been hurled from a spaceship in orbit and then impacted here. In one word, it was an orbo, acronym for "orbital bomb".

Medon got his commission on December 20. Then he went for some R&R in Tuxee, again meeting with Snofrid for some magic days with wining, dining and play; golden days, poetry and song, swimming in a sea of love...

Then their dream was torn apart, ripped asunder by the sound of a capsule thumping down in the pneumatic tube receiver in their apartment. Medon awoke and for a moment wondered where he was, groping for the woman lying by his side, tumbling over the remains of yesterday’s dreams, getting hold of the capsule and extricating its contents.

He tried to discern what it read but his eyes wouldn’t focus, he was still sleepy. He took a packet of cigarettes from a sideboard, lit one and inhaled the smoothly flavored smoke.

A cold morning light filtered through the Venetian blind. Snofrid was sound asleep. Medon smoked his cigarette slowly, treating his lungs with the ethereal drug. Then he stubbed it out, unfurled the paper of the tube and read:

Guards Battle Group, Medon thought, that’s nice, although it’s another battalion since last we met. And company commander and 1st Lieutenant, well that’s alright with me...! It’s about time. And I’m no absolute beginner, I’ve commanded a company already, in the toughest conditions conceivable: in lethal combat against the Taurians.