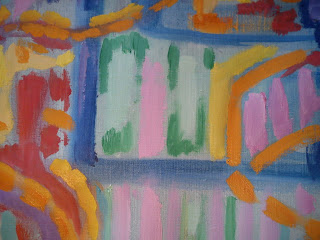 It's time for another ultra-short piece, a flash fiction as we call it in the industry. A work of fiction shorter than 1000 words. Here's my latest oevre.


Criminal investigator Johnson lived and worked in Anytown, a city somewhere in the Heartland. Once he was working on a murder case. However, the poor man went mad trying to solve it so another policeman had to take over the case. Smith, the new guy, did his best trying to decipher the illegible notes of Johnson, and he got some leads that eventually led him to a villa on 378 Park Drive. There a possible suspect would be living so Smith took his car and went over.

Finally there he found a letterbox with the address ”378 Park Drive” next to the drive of the villa. But turning around the streetcorner Smith found another letterbox, this one next to a cobbled walk leading to the back door of the same house. Here the address was ”101 Mayfair”. In a way it was logical since they were different streets and the house was situated at a streetcorner -- but why two letterboxes at the same house?

Smith went up to the door and pushed the ding-dong. And who opened but Johnson, the mad policeman. After some more investigation Smith concluded that Johnson was the murderer, under the covername ”B. Batty” who happened to live in the same house although around the corner. A true schizoid: one man with his two personalities living in the same house, but on different addresses!

”I daresay,” Smith said to himself when the case was solved, sitting in his office smoking his victory cigar, ”this was a remarkable case. You could call it a criminal variety, with psychopathological undertones, on the theme of ’fireman also being a pyromaniac’. In this case, it was about a policeman being a criminal, my own colleague Johnson as it turned out.”

Smith took a whiff and let the smoke dance around in his mouth, slowly blowing the smoke out. Smoking cigars shouldn’t be done by inhaling, namely.


Related
Another Flash Fiction: Details
The Ark
The Ascended Masters
In Swedish: Kopisten i Babylon
In Swedish: Melinas resa