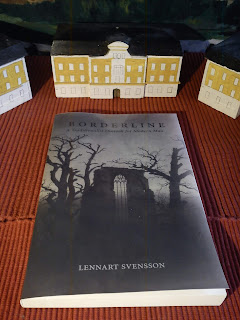 My essay Borderline was published in 2015. The current year, 2016, in April, Heathen Harvest had a review of the book.


The review is written by American poet and author Juleigh Howard-Hobson. Apart from praising the book for being what it was meant to be, a readable overview of perennialism for today's culture, she appreciates the book's style:


Svensson writes with a smooth ease, his words flowing like intelligent conversation flows, meandering here and getting straight to the point there in a natural, balanced manner.


And because Borderline is a supremely well-constructed book, [a certain chapter] concerns the creation of all that shares in the state of being (...) [T]his could be heavy-going, but Svensson manages to punctuate the ponderous with light “unscripted” statements like, “I must have forgotten noting it when putting this down on paper once” (concerning the ultimate source of a creation myth), that make a chapter’s worth of philosophical musings on the beginning of existence lively and interesting rather than deadly and dull.

To this I say: indeed, some effort on style was made when writing the book. I suspected that hundreds of pages of conceptual discussion could be hard to digest, therefore, I aimed at a style of "tight but loose," allowing for passages like the one noted above.

The review continues saying this, also touching on the style of the book:


Svensson gives a quick summation of Vedic Philosophy after this, having dived into it (so to speak) while discussing the creation of everything. It is fascinating to note that when he talks about The Rigveda, “the Upanishads and its successor, the Bhagavad-Gita,” the translations he uses are his own. This is even more fascinating when you realize that the book you are reading is in English although Svensson himself is Swedish, and he still manages to convey both personality and intelligence.

The review says a lot of things, virtually all of it in a positive vein. This paragraph sums up the text rather well:


There are twenty-six chapters that make up the bulk of this two hundred thirty-three-page book, which is also comprised of an introduction, a coda, aphorisms, a list of sources, and an index of persons mentioned. Spanning from Plato to Castaneda, Svensson manages to not only capture the essential spark and esoteric meaning of conjectures regarding ontology—the nature of being—but he also manages to recast these conjectures in a new light, “so that the educated reader of today gains clarity in the matter.” Achieving such a feat is not an easy task, I imagine, but achieve it Svensson most certainly has.

The whole review can be found online here. As such, Heathen Harvest has been online sine 2003 as a site for neofolk, ambient and industrial music plus related literature of the traditionalist kind.