An Interview with Jack Steelnack, aka. "the Steeler," aka. "Superman in a Sidecap" 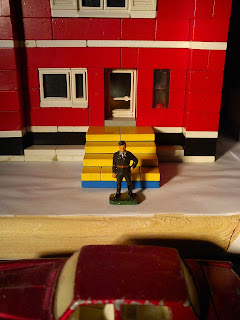 We all know Jack Steelnack: "The Steeler," "superman in a sidecap"... that's how we know him, that's some of the nicknames he goes by. And we've all seen him drive around town in his red limo, and we've all seen him standning in his red mansion looking out over the urban vistas; see the pic above...! That's him alright. So, we know him that much. But -- for a deeper probing of him and his worldview, hereby an interview with this living legend. -- Part Two of the interview is here.


We've had the honor of interviewing Jack Steelnack, superman of the new age and an upcoming politician with his Steely ideology. The text will be reproduced below in Q/A form; needless to say, "Q" means our question, "A" means Mr. Steelnack's answer.

Q: We'll start at the beginning, at the Source... so, what’s your opinion of God?

A: I’ve always believed in God. From my very youth. From when I was very young, as a kid strolling in the wilds of the outback, as "Outback Jack," God was in the skies, the rivers, the whispering of the wind in the trees... I live with God, he’s always there. I can’t understand how atheists function. I mean, you can’t get around the concept of God. To deny him on this or that formal ground is nonsense. God is a holistic phenomenon. Feel it... live it...

A: I believe something like that, yeah. Divine grace, divine presence... atheists just don’t get the fullness of the divine worldview.

Q: Divine and godly... but in politics, shouldn’t the focus be on rational programs, analysis and a scientific approach to problems?

A: It goes hand in hand. I mean, we Steelers use rational problem solving and analysis. But in the final instant the decision has to be divinely led. He who doesn’t carry divine seeds within him will never give birth to a new world.

Q: So faith in God is a centerpiece of Steelism?

A: It is. I here think of the wise man saying, ‘When religion and politics travel in the same cart, nothing can stand in their way.’

Q: So, is Steelism a religion?

A: Call it what you will. It incorporates many strands that have been labeled as religion. Ultraism is about faith and devotion. It’s about dedication, charisma, zest and pizzazz.

Q: Do you believe in fate?

A: I must since I'm the fate of the world... I’m an instrument of providence. And I have a mission to fulfill.

Q: They call you a kind of shaman, a magician... what’s your comment on that?

A: I’ve been called many things in my life. Magician is one of the more polite labels stuck on me...

A: Verily. Spiritualist, hypnotist, astrologer, exorcist of the invisible, soothsayer, alchemist... I won’t protest at being called these things.

Q: There is much whispering about the coming of a Savior, a Faustian Kingdom to come... are you that savior?

A: Something new is needed in the miasma of materialism we’ve been living in for so long. Faith, devotion, spirit-over-matter... the youth understands it. The old generation, for its part, is comfortable in its materialist indulgence. It has become comfortably numb, as the poet said...

Q: The youth, you just mentioned the youth. What’s your basic message to the youth of the Western world?

Q: Can you explain the Steelist philosophy in one sentence?

Q: OK then... can you reveal it in one sentence?

A: Well OK... that would be like: I am. Nothing unreal exists. Willpower and vision is the answer to everything. Be either hot or cold. Shine like the sun, burn like fire. Burn, holy flame...! Conversely, to always seek the golden mean and trying to be neutral leads nowhere.

A: ... I wasn’t finished! Steelism is dedication, rapture, reverie, daze. It’s ecstasy, transfixion, transmutation – and zest, vigor, ardor, fire-and-movement, the sky’s no limit. It’s about light and joy. It’s about overcoming the forces of defeatism, death and sterility. And after all the fighting is done, after materialism is defeated, when sterility and senility is gone from the face of the earth, I have the following vision: that we’re all sitting in a lush garden, surrounded by life and light, being at peace with creation. The whole of the Western world will be a garden – a Victory Garden, if you will.

Q: In your speeches there’s a lot of talk about Will-Thought. Can you elaborate on that?

A: Will-Thought is will and thought united. It’s the strongest force in the universe. With will-thought we can change matter, we can ‘create’. Will-thought is the marriage between will and reason. Other thinkers tend to stress the one or the other, will or intellect. I fuse them. And so I’m the long sought-after synthesis of these thinkers.

Q: What’s your take on alchemy?

A: It’s part of my creed. As a metaphor. Like, reality is about the evolution of consciousness in the alchemy of time... we all live in the alchemy of consciousness through time. – It’s like the idea that life and thought are inseparable; thought must be subsumed under the experience of life. This would mean that life, to live, to try and try again, is paramount. To develop as a person you need to be ‘alchemically transmuted’. You must integrate life and thought. You can’t just sit and read books and think that this alone will make you wise. – And as I just said, with will-thought we can change matter. And that’s transmutation, that’s alchemy.

Q: Are you an angel?

Q: The Steely creed speaks a lot about war. Are you starting a war?

Q: In the figurative sense, which is the worst enemy of mankind?

A: Atheism. I’d say that people become atheists because of a lack of intuition, their brains suffering from a kind of ‘crossed paralysis,’ being cut off from the invisible aspect of reality, lacking the ability to sound out their inner depths.

[And that closes the talk. Maybe we'll hear more about this Jack Steelnack figure later, maybe not. We'll see.]

Fascinating reading. I would certainly want to read more about this character.

Thanks for the comment. -- In the pipe is a Part 2 of the interview. So, the plan is that this will be posted soon.