Review: Vril, the Power of the Coming Race (Bulwer-Lytton 1871) 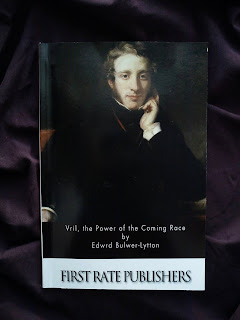 We have previously written about Vril. Also known as human magnetism, atmospheric electricity, prima materia. And The Field. Now for Exhibit A in the subject, the book that launched the term. And that book is Vril, the Power of the Coming Race.

This famous line was written by British author Edward Bulwer-Lytton (1803-1873). His novel Paul Clifford from 1830 begins in this way.

Bulwer-Lytton wrote more stuff, novels like The Last Days of Pompeii and Rienzi, the Last of the Roman Tribunes. On the latter Wagner based his famous opera.

But in this post we are mainly interested in the novel Bulwer-Lytton wrote in 1871: Vril, the Power of the Coming Race.

Apart from Paul Tice's Vril or Vital Magnetism (1911) this is one of the major sources of the concept of Vril proper. Probably Bulwer-Lytton’s book brought mankind the first mention of the concept – the first expression of this eternal force in terms of Vril.

The book is a novel. It is fiction. However, what it says about Vril is coherent and in line with what we have earlier said.

In Vril, the Power of the Coming Race, the narrator climbs down a cave. After a while he finds himself in a subterranean land, lit by lamps. It seems to be a giant cave where the roof isn’t discernible.

He meets people there, noble and advanced. They have mild lights, they have robots serving them, they have powerful weapons. The energy source for all this is said to be Vril.

When trying to explain Vril to us the narrator puts it in the region of atmospheric magnetism, mesmerism, electrobiology, odic force. That is, in sync with what we have earlier said.

The people he has met, the subterranean race, is called Vril-ya. With instruments called vril conductors the Vril-ya “can exercise influence over minds” [p. 17 of the First Rate edition, sine loco et anno]. The Vril-ya use telepathy with Vril as a medium. As Paul Tice would say, they energize thought with Vril. The Vril conductor amplifies the power of the thought.

The function of this Vril conductor isn’t given by Bulwer-Lytton’s narrator. But he says that he himself has been hypnotized into learning the language of the Vril-ya. “... it was through the agency of vril, while I had been placed in the state of trance, that I had been made acquainted with the rudiments of their language” [ibid].

The Vril conductor might, however, be equal to or similar to (or be a component of) the Vril staff, another tool used by the Vril-ya. With good intent it can cure. With hostile intent it is a powerful weapon. “The fire lodged in the hollow of a rod directed by the hand of a child could shatter the strongest fortress, or cleave its burning way from the van to the rear of an embattled host.” [p. 20]

Vril is mentioned throughout the novel but it is mostly there as an energy source. There is no further ambition to penetrate its secrets. Instead, the narrator concentrates on things like the language of the Vril-ya, its societal organization, and a love story between him and a Vril-ya woman.

Inside earth lives a superman race with powerful weapons... that’s the gist of the novel. It is written in a stiff, pedantic style but it is a novel to return to, a novel with a lot of mystery surrounding it. Like, how did Bulwer-Lytton get the idea for it? And, is it based on truth?

As we have seen Nikola Tesla spoke about electricity abounding in the atmosphere: “Electric energy is everyhere present in unlimited quantities and can drive the world’s machinery without the need for coal, oil or gas”. Bulwer-Lytton is on the same track with his concept of “atmospheric magnetism,” mentioned above as a synonym of vril. In other words, vril is all around us, in the air, invisibly.

Even more of this we get when Bulwer-Lytton in his novel quotes the scientist Michael Faraday (1791-1867).

When first presented with the concept of Vril the narrator says that he’s stupefied. Nontheless, he can liken it to magnetism and galvanism and also with what Faraday “intimates under the ... term of correlation” [p. 16]. Then he quotes Faraday himself:

”I have long held an opinion, almost amounting to a conviction, in common, I believe, with many other lovers of natural knowledge, that the various forms under which the forces of matter are made manifest have one common origin; or, in other words, are so directly related and mutually dependent, that they are convertible, as it were, into one another, and possess equivalents of power in their action.” [Faraday after Bulwer-Lytton, ibid]

This captures it all very well. This intimates the all-pervading nature of Vril: “where anything is, Vril is” (Tice), and the equality of Vril with quinta essentia, prima materia, the ether etc. It is omnipresent; it is Omnium...!

Bulwer-Lytton probably knew more about this than what he discloses. He was a novelist and artist at heart, he was a teller of stories with fictitious embroidery, and in Vril or the Power of the Coming Race he depicted an etherically driven society in this way – the artistic way, the novelist way. It becomes a little unsystematic but what he says is feasible for a student of human magnetism, of vital power in nature and in man.

Again we ask: how much did he really know? About Vril, about subterranean supermen?

And again we intimate: Bulwer-Lytton knew more than what the novel may convey to us.

Case in point: in 1842 he wrote the novel Zanoni, having as one element a mysterius brotherhood spiritually ruling the world, like the mahâtmas Blavatsky later told about. And it is said that his novel is especially important for followers of occultism because of “the suspicion—actively fostered by its author—that the work is not a fictional account of a mythical fraternity, but an accurate depiction of a real brotherhood of immortals” [French, The Theosophical Msters, 2000].

Bulwer-Lytton knew a lot, a lot more than what’s rendered on the pages of his novels.