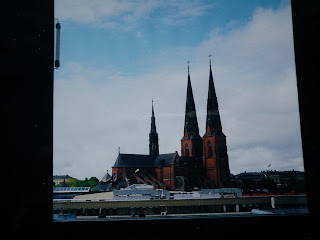 Sing praise for the Northern temple on the hill... that's how this poem begins. Then it evolves into an all-encompassing tapestry, bringing in the Wild Hunt, Horgalåten, the Valerian album "Birds of the Master," and more... a lot more.

It's time for a poem... by me... for I'm a musical man, eine musische Mensch, and you can't stop me from singing... especially not on this my blog.

The poem you're about to read plays in the Uppsala dome in central Sweden. In Swedish, "Uppsala domkyrka". The largest temple in Scandinavia, with some competition from the Trondheim dome in Norway.

Here goes, then, my poem for today. Uppsala Dome.

I am dancing around in the Uppsala dome,
going clockwise, as we do in the west, as we do in the east --
in Christian churches, around Hindu temples --
clockwise honoring the divine,
circum-ambulating the god.


Dancing around in the Uppsala dome, going
round the altar, going round the ambulatory --
spiral movement forever, like the vortex
creating reality -- for I am the vortex master,
master of storms, king of tornados -- and
the storm begins here, with me, in the dome.


There's a storm coming up and I AM the storm,
I create it by making rounds round the altar,
by going round and round, maddeningly like a flock
of crows in the sky -- or rather jackdaws,
that's the Uppsala variety of passerine --
round and round the church towers they fly --


a vortex of birds, like "Birds of the Master"
in the Valerian adventure... a vortex in the sky,
look at them and go mad, see the twirl and
you're caught in the movement -- like the
dancers having to dance to the Horgalåten,
the evil fiddler forcing them to dance to
their death, forever whirling to the music,
round and round they went, until only their
skulls were rattling around on the ground.

yea, verily, I sing of stars, a vortex of stars --
for the Milky Way, our galaxy, is also such a vortex,
spiral, twirl... a four-armed fylfoot going round
and round in the eternity of space...

I am the cloud spiral, the vortex of birds and the
Horga dancers -- and the spiral movement
round the Uppsala altar.

I'm the nexus of the crisis
and the origin of storms...

I'm the whirpool, the maelstrom,
Charybdis, eddy, tornado, taifun...
I'm the rider of the storm, the Wild Hunt,
the Yuletide chase in the sky, led by
the Wild Hunter, Odin, god of storms...

Pagan and Christian I am, heathen and high-church --
I am high in the church as I crazily go round
the altar, creating a vortex, creating a new
world, a new reality -- a new way of looking
at ourselves and the world -- a Pagan-Christian
synthesis, a merger, a new shiny amalgam
of spiritual splendor... the only way to fight
the Astral War, the only way to end the Astral War.

Related
Another poem: Science Fantasy Superman
Yet another poem: Comfortably Strong
Astral War -- some remarks
A presentation of this blog
Horgalåten = "the Horga Song", very fine archaic Swedish folk song, mentioned in the poem; here on Youtube
Same song, musically a little more tame as the previous version, however, this one has the classical lyrics too
Picture from the Svensson archive of, you guessed it, the Uppsala dome.
Upplagd av Svensson kl. 05:02