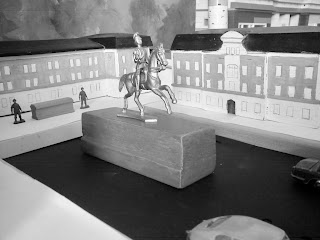 I sometimes sit down and meditate. I bring down the pace of respiration. I concentrate the look on a certain point before me. I settle down, I come to rest.

I meditate, I become the center of the world. As can you, if you have the will to meditate.

I meditate, i mobilize my will. I want to be calm, I want the world to see the light that I see.

In 2011 Earth ascended. The positive forces are gaining ground.

Gods and devas soaring down from the sky...

Sky processions, we are watching you arrive...

Evil people can’t endure in the light that is spreading after Earth’s ascension.

We’re in for a coming Golden Age. But first some elite club elements must go.

This awaits to be done. It will be a long process. The linchpin of elite club rule might be the US. Therefore, a restored American republic, based on the Constitution and the Bill of Rights, would be the first step to end elite club or "Cabal" rule.

There are many a good details pertaining to this. There are constitutional issues, there is the question of revaluation of currencies, and there is a vision of grand scale reform. However, we will not go into all this. Instead, we will focus on one aspect of the emerging US governance: the role of the military.

When the Cabal took over the US it succeeded rather well in gaining control over the media, the academy, the industrial-financial sector, the judiciary, and the political sector at large. However, the armed forces were not so thoroughly co-opted.

Historically, the Cabal didn’t manage to infiltrate the military as much as it did with all the other branches of government. Therefore, the US Military might play a role in a restored government to replace the one having usurped it, the so-called US, Inc., the “deep state,” the Cabal co-opted American governance.

You could say that the US defense forces carry the sword of justice. A theory maintains that Pentagon now is ruled by good guys, so-called “white hats”.

The theory is that Pentagon doesn’t any longer obey the commands of US, Inc. We saw this already in September 2016 when (according to NYT, 30/9) Secretary of State John Kerry couldn’t convince the military to back up his threats against the restarted Russian offensive against IS in Syria. It wasn’t spelled out, it was to be read between the lines – but it was in the cards, the syndrome of the US military not doing the Cabal’s bidding any more.

It was like a discreet coup, a kind of “veto coup”. The US military wouldn’t any longer fight the Cabal’s illegal wars; instead, it would defend the Constitution against its enemies, foreign and domestic.

How did this start? How did the US military stop being led by the noose to fight imperialistic wars, how did it put down the foot and start defending the Constitution? This development is in a grey area right now. For instance, you can’t go to the Pentagon website, to Stars and Stripes or whatever to read up on “White Hats History”... But there are clues here and there. For instance, in 2012 David Wilcock (1973-, author of The Synchronicity Key and The Source Field Investigations) said that predominantly, Pentagon now was led by positive forces. The awakening among the crucial leadership is said to have come about after 9/11, with officers noticing how dark forces were at play, with machinations going on putting them outside of the ordinary reporting channels. Then these side-stepped officers are said to have started a subtle (and sometimes not so subtle) resistance movement working for the good, for the Constitution they are sworn to defend and against the madmen ruling the US after 9/11 and before, in short, US, Inc. = the Cabal.

As Wilcock says in the blog post: “Our brave and valiant soldiers have taken an oath: To protect the Constitution of the United States, and its people, against all enemies – foreign AND domestic. – They did not pledge their lives – their blood – to keep a handful of sociopathic, genocidal bankers in control of the planet, its people and its resources.”

The US military is one of the few legitimate governmental elements left, there to protect the Constitution. In this, they have the assistance of police, Federal Marshals, retired military and maybe even responsible civilians.

The linchpin in taking down the Cabal is this legitimate defender of the Constitution, the military. There has to be an executive element in defeating this evil. It can’t just be done by “RV,” the as such sorely needed revaluation of currencies, putting them on a gold backing. What is needed is executive force, performed under the Law, and the US military, police and Federal Marshals are here to do just that. To defeat the Cabal we need Responsible Men, men combining authority with responsibility, and the military might be the place to look out for such men.

For instance, in August 2016, the US Navy and the Marines had an aircraft carrier sent to Libya to bomb IS bases. Most probably this was a White Hat operation, not ordered by Obama or Kerry. Then, in September, came the above mentioned refusal to “go bomb Syria,” to counteract Russia’s new Syrian offensive. This Pentagon would not do and it seems to be part of the same pattern, that of the White Hats not any longer doing the NWO’s bidding.

It is true that since then, President Trump has put “boots on the ground” in Syria, executing a kind of intervention with US troops. But the troop contingent is small, oh so small, and its operations aren’t “hot,” it is mostly a game of watching and overseeing things. A grey area war. All told, major war is still NOT in sight.

To conceive of the military as “the good guys” might be hard for some. In general, after the Vietnam War era “Pentagon” is not a symbol of goodness. But that is because it was infiltrated by evil forces and led astray to fight imperialistic wars. At its core the life of a soldier is about loyalty to the Constitution, to serve; it is not about indulging in death and destruction.

Generals don’t start wars; politicians do. The political leadership decides on policy and who the enemies of the Constitution and the realm are. Now, it seems like the military has seen through the current, evil, Cabal-concocted policy and said no to further imperialistic wars. And in all this there is a tangibly spiritual element. Positive aliens are in on the deal. Archangel Michael wields the sword of justice and, on Earth, positive military and White Hats might be doing the same. On the web, you can for instance find this, a channeling of the selfsame Archangel Michael by Ron Head. In this post, there are some lines about “spiritual military leadership”, like this:

Now it is time for us to speak to you about military matters. You will see almost all of your star brothers and sisters wearing a uniform of some sort. During your long history of conflict, you have learned that to mean conquest. In more peaceful societies, it means service.

This has to be underlined: a soldier’s uniform is the symbol of his willingness to serve. It is not about dominance and haughtiness per se. This is symbolic of the emerging role of “white hats” military we see, backed by spiritual forces.

Does indeed the Pentagon White Hats and all have divine backing? In the above-mentioned post from 2012 David Wilcock intimates it:

Top insiders have now confirmed that everyone in the Pentagon is now aware that some form of Divine Intervention is happening – regardless of what side they are on. – Most of them don’t know who is responsible. Even the ‘bad guys’ are now saying it could be ‘Angels or Aliens’ doing this stuff.

As for indicia of positive aliens being around on Earth since time immemorial, see the previous chapters of this study. Divine presence is no news to the well-read mystic. Thus, we could now be witnessing the Heavenly Host backing up military forces in cleaning out the Cabal. We are seeing “war in Heaven, war on Earth” in our very lifetimes.

In this post, it is speculated how the US military seems to be in for a political role. For its part, this will not mean the declaring of Martial Law. For, it is said, such a move would spoil the good cause forever. Rather, what we might be seeing now is a “benevolent and silent coup d’état”. If so, it would – as intimated above – be a discreet “veto coup,” a case of the military putting down the foot to the forces of evil, saying, “No more of your shenanigans, now we’ll ensure a restoration of Constitutional rule”.

This should be the road ahead. But things can't be done discreetly forever. At some point in time a Responsible Man must go in and take action. However, for certain “image reasons” it isn’t so easy. As we just intimated (no declaring of Martial Law) the military can’t just go in and take over; that would meet public resistance. In “Matthew’s Messages” of 1 October 2021 the problem is addressed in this way:

The ... Deep State [is] operating the government; and the military forces, which pledge to serve the Constitution, are holding them at bay, so to say. While it’s clear to most of the commanders and knowledgeable others that the country cannot continue in this dysfunctional manner, it is not yet clear how to change it with the least amount of disruption and confusion and avoid cries of ‘military coup.’

This has to be mentioned for the record. The US military, with the army in focus, right now has image problems. With a little historical overview you could say: after WWII the goodwill of the US military soared sky high; after Vietnam it surged low. In the 80s and 90s it had a resurgence but this was spoiled after Iraq 2.0 and the Wikileaks film, “Collateral Murder”. Now the US military has retreated from Iraq; at home it sometimes rattles its arms along with the police, rendering it a not-so-favorable image in the public eye. These actions may be lawful and constitutional – but are they popular, are they given the right propagandistic “spin”...?

In short, the US Military needs to become more popular before it can assist positive forces in taking down the Cabal... and this “image-brush up” might take some time.