No Risk for Major War 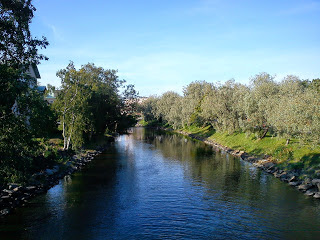 Despite all the current hullabaloo, there's no risk for major war. So stop being a Cassandra, stop being a doomsday prophet...! I'd say, the ones prophesying war today are nihilists with chaos inside, people enmeshed in fear-based thinking. -- The text has previously been published on the site Motpol.


At the time of writing this, ”there's war and rumours of war”. And still there are nuclear weapons around to ”obliterate” us. But is there really a risk of major world in the world today? No, I’d say, not in the least. The war trend is going down. The Zeitgeist is essentially peaceful. Thus, the war mongering, even by seemingly sane commentators, has to stop.


The Powers That Be

There is war and rumours of war. The Powers That Be indeed seem bent on starting the Third World War. But the current Zeitgeist is against a major war to break out. Also, the US-EU-Russia-China deal with Iran, 14 July, 2015, was a way toward a calming down of the global situation. For instance, in this treaty Iran promises not to acquire nuclear arms – and these arms they gave up trying to build already in 2003, according to a National Intelligence Estimate from 2007 (”Iran, Nuclear Intentions and Capabilities”).

So peace will prevail. All the internet pundits prophesying ”war this, war that” are way out of line. Also, in the long perspective, the level and intensity of wars has gone down since 1945. The late 1990s saw another turn for the better. The war situation deteriorated a bit in the 2010s; that’s true. The Ukraine and Syria conflicts have had many deaths. But the war situation of today is not anywhere near that of the 1970s and 1980s.

Hereby some figures to back up my claims. For instance, in 2013 two (2) significant civil wars were ongoing, Syria and Congo. I call that, overall, a peaceful world. My opinion is supported by a report from the peace researcher Peter Wallensteen, published in July 2012. My reading of Wallensteen is based on a Dagens Nyheter article by Anders Bolling from 6/9 2012. Bolling’s article may be somewhat biased. The headline is, on the basis of the big picture given in the article, misleading. The title is ”Minskande krigstrend bröts” = ”Declining war trend broken”.

I mean, that statement might be true in itself. But this was only about the development for 2010-2011. Looking at the period after 1950, the wars have both become less frequent and less bloody. In all, this declining war trend continues.

Bolling’s article focuses on the negavtive aspects of the report, blowing them up. It’s true that the number of armed conflicts increased in 2011. ”The Arab Spring” with the focal point in Libya was behind the increase. But generally, Bolling writes, the trend is pointing downward. In the long term, it’s obvious that we live in a more peaceful world after the Cold War ended: ”In recent decades, the number of armed conflicts in the world has shown a clearly declining tendency.” [Bolling, translated by the author]


In My Crystal Ball

This is worth remembering. In 2010-2011 Wallensteen and his researchers at the Uppsala Conflict Data Program UCDP could note an increase. Wallensteen thinks that this is a trend, that the trend of peace processes and agreements ”may be threatened.” I disagree. Of course, Wallensteen doesn’t say that we’re going back to the Cold War. And this is what we have to remember: the Cold War isn’t coming back. This is an important factor when taking a look at the world of today.

I mean it like this: in my crystal ball I can’t see that the great powers would suddenly begin to openly threaten each other with nuclear arms again. And overall, the armed forces of the world are too small for a new cold war. The conflicts that used to rage over the whole world, they occurred more or less in the context of this former great power conflict. They were incited by the United States and the Soviet Union in order to sell arms to the contestants. This large-scale arms trafficking and ”assistance in the form of weapons” doesn’t exist anymore, at least, nowhere near the same levels as in the 1980s. Having, among other things, this in mind, I am an optimist.

In the topical article Bolling also says that Wallensteen, overall, is an optimist: ”At the same time he emphasizes that the level is still far below the darkest years of the early 1990s, when almost 53 armed conflicts raged.” You should also remember that Wallensteen mathematically counts the number of conflicts, all of which have at least 1,000 dead. But there’s another criterion available in making these trend estimates: the number of dead in battle in each of the conflicts. And this, in studying the global war situation, is a number which has plummeted dramatically. This, according to Bolling, researchers in Canada has stated. They say the number of dead in battle by conflict decreased by 90% between the 1950s and the 2000s.

This is a staggering figure. And a compelling figure. This must be considered when discussing our world and its supposed bellicosity. You must see the big picture. To believe in a return to a warlike world à la the 1950s, with bloody conflicts in Korea, the Middle East and Africa, or believing that we get back conflicts as the Vietnam War, Afghanistan 1979-89, the war Iran-Iran at the same time or that Central America would become a war scene as it was in the 80s – this is totally irrelevant. It’s a pessimism that’s somewhat silly.

Indeed, silly? But what about nuclear arms then? They are still around. And they may be used. And a single atomic bomb going off could trigger a nuclear deluge because of misunderstanding. – To this I say: nonsense. This is defeatist nihilism, advocated by people having chaos inside.

Since 1945 the so-called nuclear threshold is insurmountable. There won’t be a nuclear war.

But then the war-mongering Cassandra might say this, as for the scenario of these times being so peaceful, as I claim: Before the First World War the world was also peaceful, the wars were few and far between and distant. The all hell broke loose 1914-1918, getting an even moore bloody reprise in 1939-1945. OK I say to this, but the zeitgeist is totally different now. Since after 11/11 2011 we reportedly live in the Sat Yuga of peace, harmony and spirituality. The preceding era was Kali Yuga where wars, so to speak, went with the territory.

You might ask: Sat Yuga is here, indeed? But overall, like domestically, we still see strife and violence. – True that, I say, The Powers That Be currently use every means of instigating Chaos. Like mass-immigration to white countries. But overall I think we do live in the Sat Yuga – an era realized, an era essentially coming true, by each one of us acknowledging the Inner Light of our beings. I mean, we must still fight the NWO. We must 24/7 advocate the ideals of co-nationalism, self-reliance and self-determination, the right of every people to exist in its place of origin. We must fight. But ”when fighting demons, beware that you don’t become a demon yourself” as Nietzsche said. Spiritually, Sat Yuga won’t be realized until we, each one of us, affirm our Inner Light.

Sat Yuga is here and it will be an overall reality when we acknowledge our beings as Responsible Men. When we stop regurgitating the war propaganda of the NWO.

How can I be so sure about this, then? Am I some last court of appeal for the metaphysical truth of the world situation? No. I’m merely making an en estimate in the gray area between contemporary events, pol-sci studies and my impression of the look and feel of it all – the Zeitgeist.


The Dawning of a New Era

The old-school era of wars is over. My guess is that hyper war, the kind of war where two states attacked each other with everything they had – that form of war is history. Vietnam was such a war, Korea another. And in the 1980s such a war raged between Iran and Iraq. Later, in 1990-91, the UN Alliance in Kuwait staged a war against Iraq in a similar hyper-war scenario. A few such wars have occurred since then (Iraq 2.0, Georgia). But now it’s probably over. Until about 2007 the US threatened to attack Iran. And I know, some Americans even talk about doing it today. But the current, autumn 2015 talk of ”attacking Iran,” is absolute nonsense. It will never come about. The window of opportunity for this and any hyper war, big league-attack-scenario anywhere in the world, is closed forever. Libya 2011 was the last show of this kind.

The US defence forces have been cut in half by the current president. Russia (and China) may have more troops available than the US, but the sentiment that allowed hyper war simply doesn’t exist anymore. Overall it’s a peaceful world and the civil wars that are raging are manageable. The current battles in the Middle East are not equal to the Battle of Stalingrad. A tank knocked out by an ISIS rebel is not a major battle of the Kursk type. But this you are led to belive by mainstream media. And pundits and media players, even those of the dissenting, critical kind, should stop repeating these NWO war memes. They should stop scaring people with saying that World War III is looming.

Personally, I'm something of a layman in this area of conflict estimate. This doesn’t mean that I’m a frivolous observer. I was born in 1965. Since at least 1980, I’ve observed the world and reflected on the wars being waged. Earlier than that, I had some knowledge of the US war in Vietnam. I never saw it on TV but I do remember television images of the abandoned capital of neighboring Cambodia, Phnom Penh, in 1975, which was a conflict in the same context. China’s attack on Vietnam in 1979 and the Soviet foray into Afghanistan in the same year, are in my memory still clear, as well as the media reporting of 1983 from the Falkland Islands and Grenada. Not to speak of Desert Storm in 1991 and what, before and after, has occurred in the Middle East. And in 1984-85 I served in the Swedish Army as an NCO, seeing the Cold War from ringside.

So I would argue that I, for being a layman in this subject – peace and conflict research, strategic outlooks, foreign and security policy – have a specific, non-professional but unmistakable background. Thereto I hold a BA in Indology, I’m a freelance writer and author of the novel Antropolis, the essay Borderline and bios on Jünger and Wagner. I’ve been published in innumerable magazines and anthologies. And what I overall see, with the main support of Wallensteen’s study and the esoteric theory of Sat Yuga having begun, is that we now live in an essentially peaceful world, about to become a wholly peaceful and prosperous world in every sense. We’re not there yet but for the future we have to acknowledge our personal beings of light as part of the situation. There are no ”random observers” anymore. Everything that we do, every sentiment, every word, counts in building Sat Yuga, the coming Golden Age.


Addenda: a list, given by Dagens Nyheter (ibid), on ”the average number of deaths on the battlefield by conflict and years”:


Related
Borderline
Antropolitan -- The Only Way to Fly