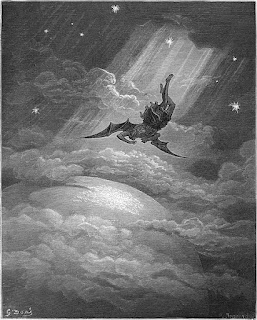 I am a writer. I write. Articles, for instance.

Now such an article -- by me -- has been published.

The site is the webzine Watkins MBS. It is a place for matters of "mind, body, spirit" (= MBS).

The title of my work is, Lucifer as Antihero (you must access it via my Twitter update; for some reason the link won't work directly here on Blogger). The article is about the way Lucifer became a sort of hero in John Milton's Paradise Lost. And after that lived on in artworks by William Blake, Byron, Gustave Doré, Odilon Rédon, etc.

You can find the text here.

For a brief summary I'd say: it began with Milton's Paradise Lost. An epic poem about man's existence in paradise, and how he was driven out because of the shenanigans of Lucifer. And in painting the background to why Lucifer acts as he does Milton creates a rather memorable portrait. Later, William Blake read Paradise Lost and saw that Lucifer is the real hero of the book. As I say in the article:

Blake saw what we today see as obvious, that Lucifer is actually the hero – or is it antihero? – of Paradise Lost. In The Marriage between Heaven and Hell (1794), Blake suggests that Milton was restrained when depicting what is generally accepted as ‘good’ but far more free when depicting supposed ‘evil’.

From there I go on to tell more about Blake's "fire-and-movement" ethos, about Byron's Cain (which also has Lucifer as a kind of hero), etc. etc.

The article can be found on the Watkins MBS site.

Other than that, I spend these days building a golden palace.