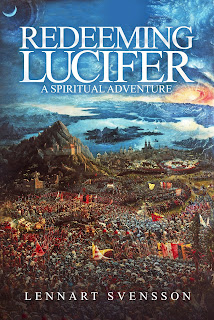 
Redeeming Lucifer is a 208-page story of good and evil, light and dark, playing in Romania in 1917 and beyond, in mythical lands and dreamworlds.

This novel tells the story of a Russian army captain, Carl Griffensteen, in search of the Rose That Never Withers -- a search leading to another mission, one of going to Hell and redeem Lucifer. The quest attracts the attention of sinister powers, angels and demons being part of the drama from the start.

So then, in this vortex of realities, this cosmic confluence, this metaphysical miasma, what can one man do? Will this very human hero persevere, will Carl Griffensteen succeed in Redeeming Lucifer...?

On the book's Amazon page can be found a somewhat longer plot summary, along with this statement:


This is a classic, exciting adventure story for all ages of the battle between Light and Dark, told with unique imagination and acute historical detail.

In the book proper the author is presented thus:


Lennart Svensson is a Swedish academic living in Härnösand on the northern Swedish coast. He grew up in a virtual wilderness of wooded hills and farmland, listening to his grandmother telling fairy-tales of old. Later, he cherished the stories of modern fantasy writers. Thus was born Redeeming Lucifer, his debut novel in English.

It also says this of Svensson's previous publications:


Lennart has published prose works in Swedish, notably his first novel, Antropolis (Etherion Forlag, 2009), a spiritual vision of the future, while in English he has published Borderline – A Traditionalist Outlook for Modern Man (Numen Books, 2015), a clarion call for idealism in this modern age of materialism. His first ever fiction in English was the story The Middle Zone, published in Morpheus Tales: The Best Weird Fiction, Volume 3 (2013).

And now, Svensson's novel Redeeming Lucifer is out. Buy it now. So that when in the future your kids ask you, "What did you do in 2017, did you buy the greatest story ever told, Redeeming Lucifer...?" -- you can safely say, "I did".

Buy the Book on Amazon.com.