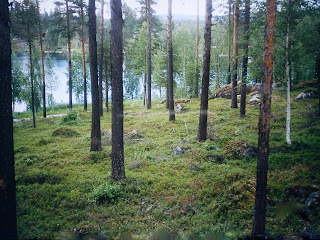 What foreigners know about Sweden is the Nobel Prize, Ingmar Bergman and such.


In my library I have a book by Peter Englund. Yeah, it's him, the Secretary of Svenska Akademin. He even signed it for me, imagine that...! Maybe I should write him and try to influence him in giving me the Nobel Prize in literature. Well maybe. Or maybe not.

Anyhoo, The Prize and Akademin are part of what you can call Swedish Mystique. It's those things that foreigners find exotic and alluring with Sweden. Another one might be Ingmar Bergman. Everybody loves him, right? Who can resist "The Seventh Seal" with the white-faced Death playing chess with the statuesque Max von Sydow?

I too like this film. Bergman might lack some depth, some esoteric footing, but on the whole his film is a great one. Life and death, the knight and the common people he meets, the landscapes, the interiors, it all adds up to a mystic whole, Swedish style.

So what's more to say about the Swedish allure? Neverending pine forests, that's pretty typical for Sweden's inland. I was born there. Now I live by the coast but we have rather a lot of woodland here too. I love these woods. It's the playground for sagas and myths, for John Bauer and traditionalism.

An artist of Bauer's school was Gustaf Tenggren who eventually joined Disney Studios and painted backgrounds for Snow White and Pinocchio. He knew how to draw trees and make them contribute to the atmosphere. Tenggren made a lasting impact on the Disney Studio and their renderings of folk tales such as Cinderella and The Sleeping Beauty.

I'm a Swede and a mystic, an adept and a scholar, so I've got to be the definition of Swedish Mystique. We've been living in a materialistic paradigm until now. Now's the time for Actionism. Now's the time for dancing in the woods to the tune of Jethro Tull's "Broadsword":


Bring me my broadsword
and clear understanding,
bring me my cross of gold
as a talisman...

The Swedish Mystique is also symbolized by our food. Grab some salted herring, flatbread and messmör, eh, delicious man. Or meatballs with lingonberry jam. Or marinated salmon with mustard sauce sweetened with honey, everything sporting that sweet-salt-combination we are famous for, reminiscent of the southern Chinese kitchen.