The Not-So-Good of Philip K. Dick 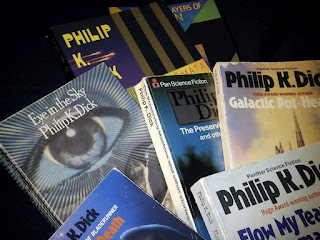 Of course I love Phil Dick also. Even when he was bad he could be interesting. Along with Heinlein, Dick was an all-time great of SF. But now I'm going to list some Dick books that I disagree with.

A Maze of Death -- you've got it, death-death, desolation and drug-induced paranoia such as insects with guns... However, there's energy and drive to it too; the setting, though depressing, has some depth. Although a hackwork this novel, being written by Dick, kinda "radiates quality". A novel about God and prophets, it has its moments but overall it's something of an oddity. Read Galactic Pot-Healer instead, it's got a modicum of optimism.

Dr. Bloodmoney or how We Got Along after The Bomb -- in short: you can't write about The Bomb. It goes beyond human drama, then as well as now.

The Three Stigmata of Palmer Eldritch -- all in all a rather fine book but I'm bothered by the setting in an Earth plagued by scorching sunshine. It doesn't contribute to the story, other than saying we shall pity the characters.

Eye in The Sky -- again a good book compared to many others. However, the framing of the characters (right-wing guy, prissy secretary, religious fanatic) is a bit too clever-clever, a Simpson's-like satire, i. e., not hard-hitting at all. And all the railings against religion are trite; later on Dick learned better in that respect.

The Man in the High Castle -- Nazis bad, Japs innately good, now that's "a bedtime-story for the children of the damned" I'd say. OK, it's wrong to call this a bad book. In fact it's got most of the marks of a classic. But I freak out on the implicit antiwhiteness of it all.

So then, I'd say the good Dick novels, the ones to read, are: The Game-Players of Titan, Do Androids Dream of Electric Sheep (mid section great, the basis for the film Blade Runner), Flow My Tears, the Policeman Said (anti-Nixon but overall great) Time out of Joint and Selections From the Exegesis (ed. Sutin).

The five best of PKD, which ones are they? -- I'd say The Game-Players of Titan, Flow My Tears, We Can Remember It For You Wholesale, Time Out of Joint and Valis.