Media Coverage of the Jünger Book 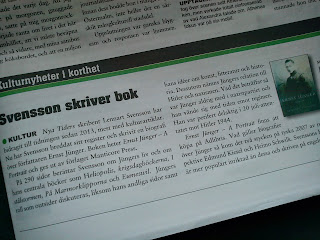 The buzz around "Ernst Jünger -- A Portrait" continues.


Swedish weekly Nya Tider has payed attention to my Jünger book. No 48/2014 runs an item about it. It's only a short piece, however, all the facts are there. So I've taken the liberty to translate a few lines from it, for your information and reading pleasure.

For example it says:


Nya Tider has a writer named Lennart Svensson. He has contributed to the magazine since 2013, mostly by way of cultural items. Now he has broadened his record by writing a biography of the author Ernst Jünger. The book is called Ernst Jünger -- A Portrait and is published by Manticore Press.

On 290 pages Svensson tells about Jünger's life and his central books such as Heliopolis, the war diaries, Storm of Steel, On the Marble Cliffs and Eumeswil. Jünger's role as an outsider is also discussed as well as his spiritual sides. And his ideas about art, literature and history.

There's more but this is the gist of it.

As for Nya Tider, it's a rather promising independent newspaper, publishing stories and presenting views that MSM tends to be silent about. As concerns items like immigration, multiculturalism, the seedier side of foreign affairs, the corruption of MSM and established politicians. Nya Tider also covers books and films beside the mainstream and presents interviews with counter-culture figures like Jared Taylor. Also, there's sometimes articles on foreign policy by Manuel Ochsenreiter of the German monthly Zuerst!

Nya Tider began circulation by the late fall of 2012. Editor-in-chief is Vavra Suk.