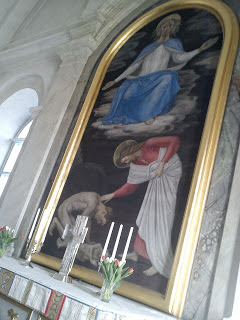 Sometimes Serrano did speak of Jesus Christ. But he called him Kristos. And he didn’t say so much more about him, other than calling Odin “the Nordic Kristos” (Ultimate Avatar, pdf, p. 111). Because Odin, like JC, was “crucified,” hung from a tree.

Serrano also says things like: “There is a Hyperborean Kristos, a Kristos of Atlantis. He is Wotan-Lucifer. His Kristianity has been esoterically presented, runewise, in these pages. He is the Warrior Kristos, of combat against the Demiurge Jehova.” (ibid p. 342)

Whatever this means it has very little to do with the Christ we know from the Gospels. But there is a theory saying that this very Christ figure, the historical Jesus, was of Aryan stock. In this post we will take a closer look at that theory.

It’s rather reassuring to get support from unexpected directions. Like once, on a Swedish new age website, I saw the Asgard of the Edda being equated with Agartha [source: “frågor och svar” 27/11 2015 on the site “Svenska St. Germain”]. Asgard, the land of Aesir gods, was placed in Inner Earth, just as Serrano intimates. New agers of that site sure weren’t into Serrano and such. That’s why this info was kind of validating, details aside.

Another unexpected support for a right-wing view I got from yet another new age source. It was when reading Närkontakt med UFO (1997), a Swedish book about UFOs – as such, rather mainstream, at least not issued by a right-wing publisher. And in a sidenote from a remark from a channeled higher being, it said that (in my translation), “... Jesus was Aryan, and so was Mary.” [Eckardt and Olsson, p. 221]

Now, to refer to “a channeled higher being” is risky. It’s like Serrano referring to what his spiritual Maestro had seen when in a trance. So I give the just quoted line, of Jesus and Mary being of Aryan stock, as a mere indicator, a theory being sometimes suggested.

Now for some more indicia on the subject. I have the following from an old magazine, The Open Court, No. 4, April 1909. In “The Aryan Ancestry of Jesus” Paul Haupt surmises that Christ had Persian ancestry, his theory beginning like this: “The Assyrian kings sent Assyrian colonists to Galilee, and the majority of these colonists, including the Median chief Deioces, were Aryans, that is, Iranians.” And further:


In 103 B. c. Simon's grandson, King Aristobulus, judaized the Itureans, that is, the descendants of the Assyrian colonists in Galilee. They were forced to adopt Judaism, but they were not Jews by race. It is therefore by no means certain that Jesus of Nazareth and the Galilean fishermen who were invited by Him to become fishers of men, were Jews by race. Peter’s speech betrayed him. The Galilean founders of Christianity may have been, not Jews, but Aryans. It is extremely improbable that Jesus was a son of David; it is at least as probable that He was a scion of Deioces or even a descendant of Spitam, the ancestor of Zoroaster.

So, this is a theory. Christ may have been Aryan.

By the way, what language are the Gospels written in? – Greek. An Aryan language.

Further, Serrano himself was no Christian; like Evola (and Savitri Devi, Ragnar Redbeard, Nietzsche...) he construed his world-view without this element. But he didn’t ignore it completely. He could acknowledge its value. Like noting the Aryan spirit in Christianity, expressed by men like Bach, Wagner, Meister Eckart, Dante and Goethe (Ultimate Avatar, p. 130). And if, in addition to this, Christ himself really is Aryan, Christianity becomes more Faustian, more Western, more European.


Related
War as Being
I Am
Caza: The Ark


The picture shows us the altarpiece from Arnäs kyrka, Ångermanland county, Sweden. By Olle Hjortzberg, 1927, depicting Christ both as the elevated heavenly majesty and the incarnated man, here to help his brother. "True god, true man"...!