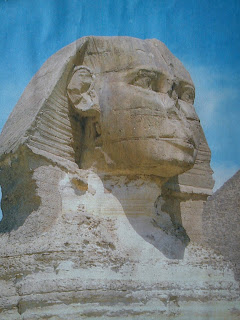 This is episode four of our primordial series; it is also the last of the series. Now we go to Egypt, the land of pharaohs, hieroglyphs, and pyramids.

In this chapter we will see what happened in Egypt after the fall of Atlantis. The primary source is Drunvalo Melchizedek (1998).

Melchizedek tells this and that about the early Egyptian scenario, a “secret history” narrative of man’s spiritual development – a story of man beginning to regain his lost spiritual legacy. It is a story of how man, having tumbled down into the darkness of the third density after having lived on the sublime heights of the fourth, rediscovered the connection with God, with the ultimate reality, with the Eternal Light. This is how it happened. It eventually lead to the birth of Christ and his subsequent deeds.

Atlantis had gone under halfway through a so-called precession cycle, a cosmic period of 25,920 years; that is, Atlantis perished after about 12,500 years. The melting of the ice cap of the latest glacial period allegedly contributed to the downfall, the fabled deluge. As intimated, man’s collective mind suffered from this downfall, he lost the strain of spirituality he had thrived in on Atlantis. So how to raise man again?

He would be raised again. This was intimated above. In the 21st century we’re at the end of the above mentioned 25,920 year-long precession cycle – and now, long story short, a mankind with a reasonably Elevated Consciousness lives on an ascended Earth. Thoth and his friends have set the stage with the Divine Consciousness Grid (q.v. Chapter Three).

So then, to begin the Egyptian story proper, in Egypt Thoth became active through his son Tat and his esoteric circle, the Brotherhood of Tat. Halfway through the remaining half of the precession cycle, after about 6,000 years, equal to 4,000 BCE, man was somewhat more receptive of change – so these demigods stepped in and taught man agriculture, pottery, writing and other skills of civilization. With time Egypt, along with the Mesopotamian realm, thrived with cities, agriculture and spiritual cultivation.

To state the above, that a tangible civilization blossomed in the Middle East starting around 4,000 BCE, is not controversial per se. However, on top of this Melchizedek makes a lot of fantastic claims about Egyptian culture, this glorious land of temples and pyramids, pharaohs and hieroglyphs. One of the possibly more relatable statements is this: as mentioned above there was a mystery school on Atlantis, led by the priests called Nacaals. Melchizedek specifically mentions one pair of teachers, Ay and Tiya, a wedded couple originating on Lemuria. After the fall of Atlantis this demigod couple along with other Nacaals went to Egypt. The subsequent Egyptian Brotherhood of Tat continued their learning, that of the existence of one God as the source of reality.

This perennial doctrine didn’t always succeed. For, there was a priesthood around stressing polytheism too; however, for 17,5 years during the 18th dynasty, 1500 BCE, the perennial concept again came to the fore in Akhenaten’s teachings. (By the way, according to Melchizedek, Akhenaten and his wife Nefertite were generated by Ay and Tiya. And, the mere existence of Ay and Tiya is also acknowledged by mainstream Egyptology.)

Akhenaten taught about one God. It was illustrated by referring to the sun so that contemporary people would understand. Akhenaten spoke about the sun as the giver of life, the conveyor of the omnipresent Prāna (= Od, Chi, Ka, etheric energy) in images symbolized by the sun sending out small ankh crosses. This is the epitome of eternal life received from the sun.

Akhenaten taught “the common priesthood” (God is within you, priests are not needed). This was a challenge to the then Egyptian priesthood. It soon revolted against him. Pharaoh Seti I took over and nullified what he could of Akhenaten’s effort, somewhat like the work of Christ was thwarted in his time. And Christ, like Akhenaten, taught that the source of reality is God – one God – and, as we have said elsewhere, this was not a male god since God was a dyad of male and female.

Melchizedek’s conclusion about Akhenaten’s teachings is this: we human beings want to return to God, it is encoded in our very being; we are of the Light, we strive for the Light, the Divine Light of which we have a fragment in our souls. And Akhenaten performed his missionary life’s work (belief in one God) to get it all encoded into the Akashic Records, the Human Super-Conscious. Reportedly, Akhenaten’s mission was successful in this respect, the “individual soul mirroring the all-soul”-concept gaining eternal relevance as an historical statement, even though his teachings came to be formally wiped out by Seti I.

As mentioned Christ taught about one God, like the Pharaoh Akhenaten did. A connection between the two is this: during his 17,5-year regime Akhenaten created a mystery ring of 300 members, 300 immortals allied with the Brotherhood of Tat. After a suitable wait of 850 years, to 500 BC, this group went to Masada in Israel and created the Essene Brotherhood. The 300 formed the inner circle. Then there was an outer circle with hang-arounds. According to Melchizedek Mary was an inner member, Joseph was a hang-around.

Further, Mary and Joseph generated Child Jesus inter-dimensionally. They did it by meditating together and calling down the divine soul in question, the Logos.

To repeat: on Atlantis man is said to have lived in spiritual bliss, not questioning his affinity to God. It was a spiritual culture that, with time, was challenged by tough-minded spirits, either by influxus or downright incarnation in human form. Man entered upon materialist indulgence, experimenting with forces of nature that made the whole land crumble. Along with the melting ice cap of the latest glacial Atlantis sank beneath the ocean – however, the demigods leading the land, the Nacaals, saved themselves and subsequently started civilization anew. Man already lived on the various, now traditional continents of the world and the Nacaals with time raised him spiritually. Other than in Egypt this, according to Melchizedek (and Rudolf Steiner), happened in Peru, the Middle East, India, and Tibet.

With these bridgeheads the whole world, the whole of humanity was influenced in this way – by demigods in the form of Nacaals and their inheritors. The Divine Consciousness Field in the form of artefacts like Chichen Itza, Stonehenge and the Giza Pyramid helped in this, in again raising humanity to its former, spiritual glory. As intimated, man now, in the 21st century, seems to have regained some spiritual standing – however, as individuals we must always remember that this process is not an automatic one. Man is not a machine, he is a creature endowed with free will. With his own discernment, intuition, Will and Thought he must voluntarily strive for the Light.

This is how we fight the dark. This is the ever-ongoing astral war against the Demiurge and his minions.

And this ends our mini-series about "primordial history". A lot more could be said on he subject. However, for a blog series the above is enough, I figure.

Sources for this episode
Melchizedek, Drunvalo. The Ancient Secret of the Flower of Life, vol 1. 1998