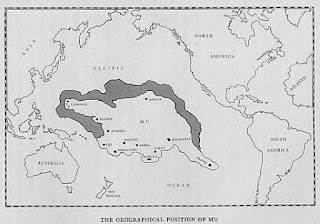 Now for Chapter Two of our primordial series -- our look at alternate, "secret" pre-history. Part One was given here. Today, we will speak about Lemuria (and a little about Inner Earth, too).

As promised in Chapter One, now for a look at the next in line of mythical “lost worlds” of man’s past: Lemuria. If Hyperborea was the golden age, then the era of Lemuria and Atlantis was man’s silver age.

Lemuria has also been called "Mu" (see for instance Churchward's map above). What, then, did Lemuria mean to man’s development? According to esoteric theory, this Pacific Ocean land was a peaceful, spiritually inclined culture, its people seemingly satisfied with reclining in the sun, spending their days acknowledging the all-pervading God impulse. This has been intimated by Sheldan Nidle.

Reportedly, Lemuria was made up of several islands. According to Agerskov, some of the current Polynesian archipelagoes indicate the position and character of the land. After a long and drawn-out process the land sank beneath the waves about 30,000 BCE.

This is according to Agerskov as is the following. Lemurians are the alleged ancestors of the current Malayan race, although over the millennia there has been some miscegenation and degeneration of the culture as such. Lemuria had a rather wide extension but it wasn’t so densely populated. The religion was fire- and sun worship. “The being who became Jesus Christ,” the Logos, is said to have incarnated as a man and lived a life on Lemuria a couple of thousand years before its demise. He tried to establish the knowledge of a loving god to his kinsmen – but – the forces of the dark started to be active here, Asuras incarnate, and with their influence the mild god became a monster of cruelty, conceived as the all-destroying and all-consuming fire.

To get ahead a bit and for the sake of completeness, Agerskov also says that “the being who became JC” had his next incarnation as a high priest on Atlantis (for this land, see next chapter). On Atlantis, he virtually did what he had done on Lemuria, trying to reform religion into more peaceful, esoteric strains, what we may call the induction of embryonic I AM-impulses. But, in all, his activities here didn’t result in much since he died the same year as the last parts of Atlantis sank beneath the sea.

Returning to Lemuria by way of Agerskov, it can be said that the Lemurians mainly lived by fishing, hunting, and barter. Agriculture was in its infancy. Boats were built, primitive vessels made of dried animal skins, the bow sewed together with plant fiber and the mid-ship being stretched out with a tree branch. Another branch served as an oar and with this the boat could drift along the rivers. Proper oars, there were not.

In the process of Lemuria’s demise, the sinking of the lands which lasted for several hundred years before the final cataclysm, many of the inhabitants fled west in somewhat more elaborate ships than the abovementioned type. By way of intermediate islands, they soon reached the eastern and southern coasts of Asia. Additionally, some refugees headed east and reached America, becoming the earliest strata of that culture, intermixing with the extant primitives and thus creating the many Amerindian tribes.

To give an ethical-spiritual summation of Lemuria it can be said to have been a pious culture, a true silver age paradise, however, not without its drama since Asuras seem to have been active there along with Devas by means of incarnation. As intimated Lemuria has left some traces in current Polynesia, which ideally would mean: strains of matriarchy, relative absence of “dominance and submission” in the mindset, a relaxed attitude towards love and sex. Within a context of “all is one, one is all,” this culture can be seen as credible on its own premises. However, it is intimated that the land went under because of an excess of female-maternal energies, just like Atlantis went under because of an excess of male-paternal energies.

As a side note, as regarding the overview of lost worlds, in esoteric theory there is also the mention of a now sunken land in the southern Indian Ocean and southern Pacific called Kumari Kandam. For what it is worth, Madame Blavatsky acknowledged such a land (although she confusingly called it Lemuria). It was a land mass touching on what is now southern Africa, southern India and Australia. Thus, the existence of such a land would – for instance – explain why all these three regions have indigenous people of dark skin and small stature. That is, pygmies, Tamils, and aborigines, respectively.

The aborigines, for their part, have a concept symbolizing the memory of this silver age existence. It is dreamtime – the magical clime where god and man interacted, dreams came true, and reality was fluent and wavering. Then came the (post-Atlantean) fall and reality solidified into the current dull materialism.

Before we continue with the story, the reasonably transparent narrative of successive lost worlds eventually leading to post-Atlantic times and “our times,” we must again say something of another lost world of a persistent kind: Inner Earth.

You could say: speaking about Hyperborea, Lemuria and Atlantis is somewhat “safe” because even the most advanced adept admits that they are gone now, sunk beneath the ocean. With the prospect of Inner Earth, it is different. Though said to exist in a higher vibration, in 4d-5d, this realm reportedly is still there, inside Earth, in a thriving civilization, still having something to say about man’s future.

Inner Earth was briefly mentioned in Chapter One. We will not go into all the details of Inner Earth here. For the record, we will only say that esoteric theory maintains that a culture exists “inside” the Earth since long ago. After the successive falls of Hyperborea, Lemuria and Atlantis some human beings went to Inner Earth to thrive in this elevated civilization.

If so, if an Inner Earth culture exists, what can be said about it? For simplicity, we will call the Inner Earth realm “Agartha”. One source will be given below – but – for this general outlook, we merely and frivolously refer to “the internet”.

If Earth is hollow and people live inside it, then Earth’s geology is shaped like this: it has a crust 1,300 kilometers thick, the crust having a center of gravity 650 kilometers down. In this latter zone the gravitational direction shifts, allowing for an interesting experience if passed through by a traveler. Then, finally, inside Earth, in “Agartha” proper, people live on the inner surface of the Earth, an area having both firm land and sea. Sunlight comes from a central, veiled sun, maybe equal to “die Schwarze Sonne” of legendary fame. The sun is made of Prima Materia, Quinta Essentia, Vril. The white supermen living inside Earth get their power from this sun. They are “the coming race,” wielding concentrated vital power, vital energy, human magnetism as weapons of war and as a more peaceful tool.

Substantial holes, allowing an entrance to Agartha, are said to exist at the north and south pole. Why, then, don’t we ordinarily see these holes? – Because Agartha, apart from being inside Earth, lives on a metaphysically higher plane (4d to 5d = higher densities). This has got to be underlined. If your mindset is materialistic and reductionist (= “3d”) you just can’t go there. Only favorably, spiritually disposed beings can enter the realm. Going to Agartha is not just about “finding a hole, finding a cave”. It is about ontologically matching the very specific platform Agartha is.

Though being located inside Earth, Agartha is decidedly “out of this world”. It is like the connection with the Nordic Aesir gods and Agartha. Some say that the Asa realm “Asgard” indeed is synonymous to Agartha. That doesn’t mean that we simply can go “inside Earth” to meet Odin and Thor. Miguel Serrano has captured the ontological specificity of it rather well:


In the book titled ‘The King of the World’ by René Guénon he wrote that the city of Agartha wasn’t always inside the Earth or inside of a mountain. In the beginning Agartha could be seen on the surface of the Earth. Six thousand years ago the city moved within the Earth. But once again the city of Agartha will return to the surface, the men will become young and Hyperborea will be here once the new age begins. (Serrano 1978 p 61)


Details aside, this intimates the “wavering reality” of Agartha and Inner Earth.

Some suggestions of the case of “Inner Earth” is given on the Swedish site St-Germain.se, a Swedish version of the Sananda site, posting various channelings and updates on the secret war. On November 27, 2015 – May 21, 2015, in the Q and A section, these clues were given by site admin Per Staffan having Sheldan Nidle as main source. [As I publish this in September 2021 the page in question is offline; we can't give you a link.]

The culture of Inner Earth / Agartha lives in 4d. We ordinary humans need to ascend to 4d and beyond to even meet its people.

Agartha is the same as Asgard of Northern mythology, a realm of the gods and a paradise. (Miguel Serrano for his part says exactly the same; Agartha is Asgard.)

The role of Agartha is said to be of some importance to the struggle to rectify Earth, intimating a process of mankind receiving help from Agartha to clean out Earth from unhealthy environmental influences – and, before this, assisting in the process of taking down the elite club (the Cabal, see Chapter Seven) that rules the Earth. Part of this process will also be “disclosure of secrets currently maintained,” like the existence of galactic cultures, man’s Pleiadean origins and other exopolitical perspectives.

There’s more to Inner Earth than this. Maybe it was the place of primordial human development. We won’t rewrite the book saying that it all began in Inner Earth but for the record we must say this: maybe “Inner Earth” was the site of the Biblical paradise. One document (The Smoky God, 1908) hints at this when saying that in Inner Earth we have the rivers the Euphrates, Pison, Gihon, and Hiddekel. As we all know these are the four rivers of Paradise, given in Genesis. Conclusion: paradise might have been located in Inner Earth. Inner Earth might have been the scene of the Genesis paradise story.

A hollow Earth isn’t such a wild idea, the idea of a world with a central sun in the middle, then empty space, then a crust. Esoteric theory maintains that all planets are hollow like this. And that it would be an implementation of Thoth’s wisdom in the Emerald Tablets, as above, so below; as within, so without. Many structures, in the micro- and macrocosm, have this structure of dense kernel surrounded by mostly empty space and then a crust, like the cell. That’s microcosmic; and on the macrocosmic plane we have the pattern of “solar system with central sun surrounded by empty space and planets”.

This is but a fraction of what you can learn about Inner Earth in secret history circles but the above will suffice for this study.

In the next chapter we will speak about Atlantis.

Sources
Agerskov, Michael. Toward the Light. 1920 (in Swedish as "Vandra mot ljuset")

Related
Chapter One of the series
Timeline: Secret History
Primordial history in Swedish