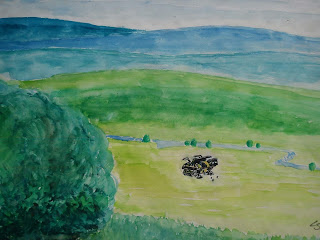 L. Ron Hubbard wrote the SF novel "To the Stars" (magazine published 1950; book version 1954). It's a succinct, convincing tale of space travel, telling us about the merchant marine of an interstellar future. It's about Assuming Responsibility, taking charge, becoming a man. The novel is a wonder of artistry and glory, compared to, say, Heinlein's "Starman Jones" which has a similar outline. Heinlein, God bless him, was a draughtsman; Hubbard was a painter. -- Disclaimer: I don't support Hubbard's philosophy of Scientology.


A portrait of L. Ron Hubbard is given in Russell Miller’s "Bare-Faced Messiah" (1987). The book is a rather good read. In parallel to dispersing myths about Hubbard then prevalent, Miller shows us that Hubbard was a complex figure. He indeed had his moments. And as for anecdotes from the bio, hereby a handful.

Hubbard once said that in a past life he had lived on the planet Zircon, being occupied as a racing driver. He was called ”the Green Dragon” and beat all speed records. One day, however, he crashed and died but he was reincarnated and returned as the driver ”the Red Demon,” and as such he beat all his previous records.

Again he crashed, again he reincarnated, now as ”the Blue Flame”. He beat his record for a third time but he quit when he realized how pointless it all was – to beat himself. Reportedly, the planet Zircon looked like the US in the 50s except that it had space travel.

Hubbard once gave the background to a philosophy he created as follows: a king gathered the world’s 500 wise to collect all wisdom in 500 books. When they had made these 500 books they were reduced to 100 to further concentrate the knowledge and in turn, these were reduced into 10 books and this, finally, was reduced into one book – and this in turn to a single word, and the word was ”survival”.

Final anecdote: Hubbard once (when he would communicate with plants) was asked whether he was insane. To this he replied:

”Of course. Only the man who denies that he’s crazy, is really crazy.”


Related
Science Fiction Seen from the Right
Swedish Mystique
The Poetry and Purple Prose of Clark Ashton Smith
Ascended Masters: Some Info
Caza: The Ark
More Poems on This Blog