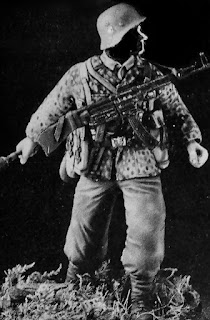 My novel Burning Magnesium was published last year. Now, a rather favorable review has been published. The review is in Swedish and this is a summary in English.


Carl Oscar Andersson is a Swedish author, in his native land primarily known for his novel Gautica (2017) [review in Swedish]. Actually, Gautica is more than a novel; it's a successful blending of the essay, the novel and the closet drama, telling of the legendary Gothic people -- its Swedish origin and its role in Roman history etc.

Andersson also writes chronicles and reviews on the Swedish identitarian site Motpol. And lately he published a review of Burning Magnesium, my novel about WWII and the Eastern Front.

As intimated the review is in Swedish but hereby some highlights translated into English -- because the novel is in English.

Andersson has some knowledge of war novels, mentioning names like Remarque, Hassel and Jünger. And then he for instance says this about my novel:

Even from the start the story has a different approach than other, similar stories of WWII -- and this is due to its philosophical slant. (...)

It's impressive that a Sweden-born author like Svensson has managed to write such a gripping novel in a foreign language, even if it's English. There are many pitfalls in directly trying to translate concepts and literary passages; however, Svensson has found a viable way of expressing himself in English.

Further, Andersson notes the Faustian perspective of the novel, capturing the wilful, striving character of the novel's hero, Arno Greif. For instance he says the following about him:


He's an interesting protagonist, this Arno Greif, a man seeing war in a different way from others. His war experience isn't just a catastrophe, not for the one who wants to go to the limits of life (like persons in less dramatic circumstances going parachuting out of planes, throwing themselves from cliffs in bungy jump, going for speed records etc., activities from a modern perspective as irrational as war).

This kind of hits the mark. The Faustian, Nietzschean lifestyle of "balancing on the edge of volcanoes" in order to raise oneself mentally, this is not just a right-wing attitude, expressed in a novel like mine. It's rather common among certain westerners -- the intimated bungy jumpers, skydivers and performers of extreme sport who today are lauded for their exploits.

As a closing remark Andersson says this of Burning Magnesium:

Here is Anderssons's review in Swedish.

Buy the novel on Amazon.

Buy the novel on Logik.