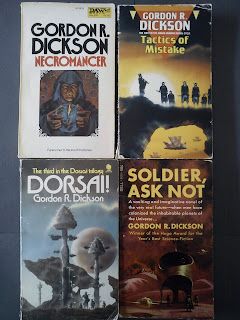 Hereby some new reading tips. Classics, newer stuff etc. The pic tells of books by Gordon Dickson and he is featured below. But the entry is about more authors than just him. -- Similar posts of this kind are this one and this one.


So then, some tips from my recent reading activity. Here goes...

Gordon R. Dickson: The Alien Way (1965). -- A tale of the first contact with an alien species, all of it with a brainy, restrained approach. A human being gets supra-sensual contact with an alien; it's not telepathy but he can see, hear and feel what the alien does. This is established by baiting the creature (by way of a space wreck that it encounters and lays its hands on) and then the intrigues are afoot: will the aliens get to Earth and once there, how to receive them...? This is a story rather well told, although I lost interest at the end when the hero went into preaching mode, telling his fellow humans how primitive they were in not being able to think outside the box as he could, the brainy know-it-all. Such an intellectual hero may be the mainstay of SF and even of Dickson's other SF -- and, even of his military SF series Dorsai. So you have to accept this, I guess. This is the way Dickson's stories go: a smart man figuring out a contrived plot and then telling all how smart he was in detecting it. It's like Hercule Poirot, Sherlock Holmes etc. However, in Dickson land there is also the element of the smartie using his sixth sense and this is kind of alluring. Dickson has a way of giving room for the unexplained. -- Not a book to actively seek out but it has its moments.

Gordon R. Dickson: Brothers (1973). -- Brothers is a novella, part of a book labeled as a novel, Spirit of Dorsai (and in the book we also have the novella Amanda Morgan, which I haven't finished yet). Brothers is a variety of the smart man solving a plot; the narrator is a police chief on a planet where Dorsai elite soldiers are deployed. A rebel movement kills one of the Dorsai in an ambush and the Dorsai are about to wreck the whole capital in search of the perps. However, the native police chief gets a respite of some hours to solve the crime, and along with his usual skills his sixth sense is employed. And in the process he's helped by the brother of the Dorsai being killed; Kensie Graeme is the one killed, Ian Graeme is the one who survives, and he is an archetypal hero of the usual Dorsai kind (q.v. the novels Dorsai, Tactics of Mistake): strong and silent. So, apart from the basic plot this tale is kind of convincing and inspiring in the heroic vein. There ain't many 1970s SF stories telling of military men in a positive light. -- All told, Brothers was better than The Alien Way (see above).

Gordon R. Dickson, Soldier, Ask Not (1967). -- Because it's part of the Dorsai series it isn't a complete waste of time. However, the psychological mumbo-jumbo drags it down. Goody-good bullshit, actually. There is some allure in the strains of intuition and sixth sense prevalent, but it isn't enough to make this a stand-out. Instead, read the same series' Tactics of Mistake and Dorsai: same pedantic approach, more tangible action.

Robert A. Heinlein, Stranger in a Strange Land (1961). -- The 120 pages I've read so far are rather fine, of future-time intrigue around a man having been reared by Martians. The anarchic strain of Jubal Harshaw is also rather refreshing: he realizes that there will always be governments but he doesn't have to like them. He values his freedom; he IS freedom embodied. Later we get to the hippy BS and IDK about that; Actionism is the way, not intellectualist-reductionist sunbathing.

Montgomery of Alamein: A History of Warfare (1968; in Swedish as Krigskonstens historia). -- Every word a preachment, every chapter an epic... This is just damn good. Monty wrote it with the aid of some experts, which could jeopardize the style and make it trite and pedestrian. However, on the contrary, the whole comes together beautifully: with summaries of politics and military development along with descriptions of certain landmark battles, seasoned with Monty's personal remarks. You can compare it with Fuller's Decisive Battles; this is also worth reading -- but -- Fuller's work is more ambitious and therefore falls flat sometimes, trying to capture the whole of (Western) history in its military history approach. Monty's book is more limited in scope and therefore, on the whole, more convincing. It even has a succinct chapter about ancient and medieval Eastern warfare. Which IDK about today. But it's there and it's succinct and like the rest of the book stylish, stylish as in "a text fulfilling its task, not a superfluous word".

Cyril Falls (ed): Great Military Battles (1972). -- This is a coffee-table book, in large format and with lots of illustrations. However, the pictures are rather well chosen. And the essays of the battles per se are succinct and convincing, making even marginal events interesting to read about. The focus is on the New Era (1600s and on), mostly Europe but the US and Asia get some chapters too. And most importantly: there is no moralizing about how evil war is.