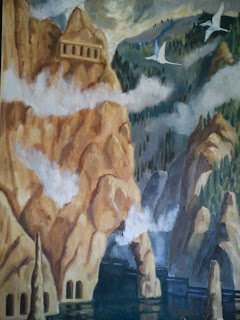 This an article about Mars, space exploration and striving.

However, today I see no replicants in need of withdrawal, no rain-soaked urban congestion in eternal night, no space colonies on Mars etc. I don't see anything of that around me today.

But we still have planet Mars.

We can still go there and shine.

But you say, Mars is only an arid, cold desert.

OK. That's what you're saying. Because you lack the willpower and drive to go there.

Because, conversely, to have it terraformed and colonized is The Next Big Thing. For Faustian man, Western man.

In the literary sense, Dick envisoned Mars as a human colony, as a goal for human endeavour and striving. And so did other SF authors like Arthur C. Clarke, Robert A. Heinlein, Rex Gordon, Öyvind Myhre, Ray Bradbury, Jack Williamson etc. etc.

I go for Mars. I'm in for Mars. Conversely, I don't care so much about space stations, Lunar colonies, Lagrange colonies of the O'Neill kind.

Faustian man wants a free, unbounded space to live in. A horizon to strive for. He doesn't want to live in closed quarters with a limited supply of food and oxygen.

OK, true: the first time on a colonized Mars would have to be lived out in underground, pressurized habitats. Because the atmosphere of Mars is too thin to breathe. And there is no magnetic field shielding the planet from cosmic radiation.

But after some centuries (many centuries), after due terraforming and creation of a magnetic field, we could live on Mars. Live and breathe, grow crops, work in every aspect of the human endeavour. Create a new culture, a new frontier for man. Strive, shine, as Faustian man is wont to do.

Once man lived on Mars. 2 million years ago. Then he disappeared, leaving only the Cydonia sphinx and the nearby system of pyramids as evidence.

We must do it.

We will do it.


[Source for humans having lived on Mars: Drunvalo Melchizedek: The Ancient Secret of the Flower of Life, 2000]