Coleridge: The Rime of the Ancient Mariner 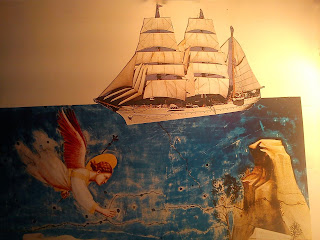 The Rime, The Rime, I love this Rime. All of it.


So where to begin? I guess I'll start with some random lines. Like the ones Iron Maiden quoted in their eponymous song, "The Rime Of The Ancient Mariner" on their 1985 album Powerslave:

These are strong lines, vividly capturing the desolation of the ill-fated ship in these death-marked waters. It's the curse of the albatross, the bird that the mariner hath slain. And why did he do that? It's not clear, he just did it, a boyish deed that generates bad karma. He shot it with bow and arrow, took the majestical bird down from its flight in the skies above the ship.

And there's more: there's Death itself approaching, or, to be precise, Death and Death-In-Life, whatever that means. Spooky it is though, and even spookier when some accursed sea-creatures surround the mariner's ship, the ship he now sails alone as the crew has been pixilated by Death's curse:


Beyond the shadow of the ship,
I watched the water-snakes:
they moved in tracks of shining white,
and when they reared, the elfish light
fell off in hoary flakes.

Within the shadow of the ship
I watched their rich attire:
blue, glossy green, and velvet black,
they coiled and swam; and every track
was a flash of golden fire.

The selfsame moment I could pray;
and from my neck so free
the albatross fell off, and sank
like lead into the sea.

Symbolic, aint it? The bird hung around his neck falls off and light shines in, the curse seems to be lifted, allayed, tempered -- but alas, it's still there! The trials and tribulations are not over, this ride has many facets. The mariner still has to travel across many-a dark waters and desolate seas.

As you can see I'm writing about Samuel T. Coleridge's "The Rime Of The Ancient Mariner." Now I'll go on with the show, even trying to reach some sort of conclusion.

Above I told you about this and that, about the mariner going about some trials and tribulations on a certain sea voyage. He is for example freed from a certain curse but not entirely saved as his shipmates have become undead ghouls in the process. Anyhow, the journey continues. The ship is ushered on from beneath by a benign water-spirit, having helped the ship previously during the voyage:


Under the keel nine fathom deep,
from the land of mist and snow,
the spirit slid: and it was he
that made the ship to go.

Note the overall style in this work: a mixture between lyricism and epic narrative. Epic poems, narratives in verse form, went out of style soon after this one (or had already), i. e. in the early 19th century, but at the same time Coleridge was a lyrical poet so in this sense he was able to communicate with the modern audience. And with today's audience too, as his work is timeless.

The curse is off but still the mariner is surrounded by his undead crew mates, looking at him with empty eyes ("all fixed on me their stony eyes, / that in the moon did glitter"). On they go, gliding over the water's surface if by wind or magic I don't know, and then the mariner descries something familiar: the harbour town, his home port, the one they left so long ago for this fateful journey.


Oh! dream of joy! is this indeed
the light-house top I see!
Is this the hill? is this the kirk?
is this mine own countree?

Into the harbour they sail. And at the same time the souls of the undead sailors take leave of their earthly vessels, having become shiny seraphs aiming for heaven:


This seraph-band, each waved his hand:
it was a heavenly sight!
They stood as signals to the land,
each one a lovely light;

This seraph-band, each waved his hand,
no voice did they impart --
no voice; but oh! the silence sank
like music on my heart.

The conclusion is well nigh.

Yeah, verily: for now a pilot approaches -- and then the great ship suddenly sinks. The mariner is rescued aboard the pilot boat and is rowed ashore. And then he's off to tell his story to anyone he meets ("this soul has been alone on a wide, wide sea"...).

This poem has many esoterical, pious traits, like the water-spirit, the sea-creatures that become friendly and the penance with the albatross hung around the neck. And at the end we have a certain hermit along in the pilot boat, and this we get to know about the hermit's life: "He singeth loud his godly hymns / that he maketh in the wood." And:


This hermit good lives in that wood
which slopes down to the sea.
How loudly his sweet voice he rears!
He loves to talk with marineres
that come from a far countree.

He kneels at morn, and noon, and eve --
he hath a cushion plump:
it is the moss that wholly hides
the rotted old-oak-stump.


Farewell, farewell! but this I tell
to thee, thou wedding-guest!
He prayeth well, who loveth well
both man and bird and beast.

He prayeth best, who loveth best
all things both great and small;
for the dear God who loveth us,
he made and loveth all.

I like the pious mood of this conclusion. The Rime isn't just some romantical outing, some stylistical showing off -- no, it's a downright spiritual, esoterical, finely vibrating piece of crystalline truth, and yet kind of restrained. I mean, the religious feeling is expressed in tangible, symbolical terms and not going about it with psalm-song, priests and Bible-beating. A perfect ending to a perfect Rime.