An Interesting Aspect of my Novels 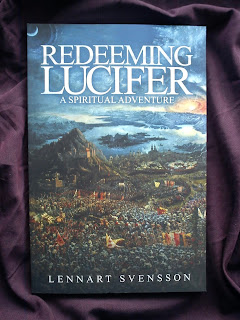 Hereby some words about my novels. They have a common ground, they share a basic attitude to reality.

In 2017 I published Redeeming Lucifer. A fantasy novel. More about it here.

One interesting thing about it is this: it has one character in common with my other novel, Burning Magnesium (2018).

Ain’t that funny? Because, Burning Magnesium plays on the Eastern Front of WWII. Redeeming Lucifer is a fantasy. However, they both connect to the same dreamworld, to the same extramundane dimension = the astral world. And the figure common to both stories is an astral world drifter, one Ringo Badger.

In Redeeming Lucifer, in a fairy land, he is portrayed thus:

”He was eventually let inside by a servant, a tall figure with a long, aquiline nose, a striped, pointed cap on his head and clothes of red and green. This was Ringo Badger, Morven’s butler and handyman.” [p. 29]

And in Burning Magnesium, in a dream state, the hero encounters the same figure:

“Next to Arno, in the dream, stood a tall man with an aquiline nose, a man dressed in a red and yellow silk hood, a green tunic, blue breeches and boots. He introduced himself as Ringo Badger, his spirit guide.” [p. 91]

There you have it, the unlikely connection between my two novels. You could say: they both, in their separate ways, portray the Astral War, the spirit war, the war constantly going on since the dawn of time. And “Ringo Badger” is one symbol of this.