Kali Yuga is over -- some notes on a controversial subject 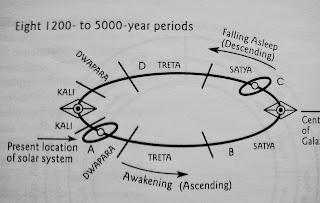 The Kali Yuga might be over. According to Indian guru Sri Yukteswar, and his disciple Paramahamsa Yogananda, the idea of a Kali Yuga lasting hundreds of thousands of years, is due to a chronological error. -- Edit October 2022: here is a kind of sequel to this article, a deliberation on what this all means.

The Kali Yuga is over.

In short, it is about this.

The orthodox Hindu view is that Kali Yuga, the oppressive age of Iron, is the current era. And it will last hundreds of thousands of years.

Prabhupāda for his part meant this, as did equally influential European scholars like Evola, Guénon, and Serrano.

However, some, both in India and the West, have disagreed with this view.

Rudolf Steiner, for his part, meant: Kali Yuga ended in 1899. And in various ways, this is supported by Paramahaṃsa Yogānanda and Drunvalo Melchizedek.

And hereby the sources for these three items so that you can check them up:

3. Melchizedek: Drunvalo Melchizedek, The Ancient Secret of the Flower of Life, Light Technology Publishing 1998, p. 101 (the illustration for this blog post is from this book).

In other words, I’d say, this information might cheer you up. We have the trials and tribulations of Kali Yuga behind us. According to Melchizedek (ibid) we are now in Dwapara Yuga, heading for Treta and Satya Yuga.

However, we need to go deeper into this. We will in this article focus on what Paramahamsa Yogānanda says in the matter. We will also look a little at what Melchizedek says.

Again: The Kali Yuga won’t last hundreds of thousands of years. Instead, it only lasted some thousand years – and now it is over. This is of a rather profound importance for our times, for how we look at the world and ourselves.

In the Bhagavad-gītā of Paramahaṃsa Yogānanda (God Talks With Arjuna, see above) we get the classic text of the Gita plus translation and comments. And the comments on verse 4.1-2 is rather interesting.

For its part, Bhg 4.1-2 speaks of the wisdom of yoga being handed down from Kṛṣṇa to Ikṣvāku, from him to Manu, and from then on to other seers and sages. However, according to Yogānanda, with the advent of Kali Yuga, “the science of yoga was almost forgotten”. (p. 425).

The common idea is that Kali Yuga began sometime after the Kurukṣetra war was finished, about 3,000 BCE – in the time of kings Yudhiṣṭhira and Parikṣīt. That is fair enough – but – one school of ancient chronology then got it wrong. The almanac came in disarray. In a note on p. xx of Yogānanda’s Gita this is clarified by referring to what Yogānanda’s guru, Sri Yukteswar, once said. Sri Yukteswar meant the following about the confusion of the almanacs:

The mistake crept into almanacs for the first time during the reign of Raja Parikishit, just after the completion of the last descending Dwapara Yuga. At that time Maharaja Yudhisthira, noticing the appearance of the dark Kali Yuga, made over his throne to his grandson, the said Raja Parikshit. Maharaja Yudhisthira, together with all the wise men of his court, retired to the Himalaya mountains, the paradise of the world. Thus there were none in the court of Raja Parikshit who could understand the principle of correctly calculating the ages of the several yugas. Hence, after the completion of the 2,400 years of the then-current Dwapara Yuga, no one dared to make the introduction of the dark Kali Yuga more manifest by beginning to calculate from its first year and to put an end to the number of Dwapara years. According to this wrong method of calculation, therefore, the first year of Kali Yuga was numbered 2401 along with the age of Dwapara Yuga.

The publisher of Yogānanda’s book continues in the note on p. xxi: “Thus, though it was known that the world was in the Kali Yuga, year 1 of that yuga came to be figured as 2,400 years earlier than it actually was. (Even when it was pointed out, centuries later, that the scriptures specify the length of Kali Yuga as 1,200 years, the erroneous calculations persisted by scholars’ assuming that these 1,200 years were “years of the gods,” each lasting 360 ordinary years. Since that time, therefore, Kali Yuga has been held to endure for 432,000 years rather than 1,200. “A dark prospect!” Sri Yukteswarji wrote, “and fortunately not true.”)

Skipping some details we may then say that Yogānanda, based on Sri Yukteswar’s calculations, means that Kali Yuga is over now. Based on the idea of Kali Yuga only lasting some thousand years (and not hundreds of thousands of years), Yogānanda holds that by about 1700 CE it was over. We are in Dwapara Yuga now.

About the same is said by Drunvalo Melchizedek. He is an American new age guru currently alive; he was born in 1942. In The Ancient Secret of the Flower of Life we read of his doctrine, based on Sri Yukteswar. Melchizedek says: we are now in Dwapara Yuga, having left Kali Yuga behind. He also agrees with Yogānanda/Yukteswar on the following points (see illustration on top of post):

. The ages within each yuga (Kali, Dwapara, Treta, Satya) follow each other, not in a linear fashion, but in a spiral-formed mode.

More could be said in the matter but this will do for the moment.

The bottom line is: we are not in the Kali Yuga anymore.

Prabhupāda’s view, and the view of Evola, Serrano etc., that of a Kali Yuga of several hundreds of thousands of years, reproduced in several books read by today’s intellectuals, is to be doubted.

Related
Kali Yuga over -- but what does it mean?
The Mahabharata
Rig Veda 10.129