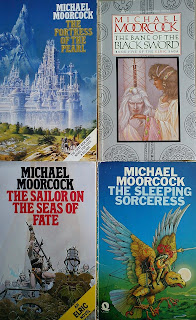 This is a blog post about an author. And about my essay on sf and fantasy.

There’s no danger if you haven’t.

Just read Chapter Ten of Science Fiction Seen from the Right. It will tell you all you need to know.

It’s like this. Michael Moorcock is an English fantasist, born in 1939. Usually, when his work is discussed, it’s all about him having written about the decadent dandy Jerry Cornelius, having edited the magazine New Worlds in the 60’s and having written a pamphlet against Heinlein.

Thats the gist of Moorcock, mainstream-wise...!

I, on the other hand, in Science Fiction Seen from the Right, focus on Moorcock’s fantasy, his Eternal Champion saga. This epic hasn’t been properly estimated in the literary community.

About this saga I for instance say:


The Eternal Champion is a tapestry of adventure, ontology and moral. The main purpose is entertainment but the saga has a way of sneaking up at you and delivering some profound wisdom. And, to this, some bare-bones nihilism... [however, this] nihilism you have to live with in the Moorcock lands.

There might be some “passive nihilism” in the Eternal Champion saga. Moorcock is no Tolkien. However, Moorcock has many other qualities. He is, indeed, “a myth-maker, an epic fantasist”. And he has written song lyrics for Blue Öyster Cult, like “The Great Sun Jester”: a fine myth that one, a fire clown, going all over the place and lighting up a grey culture.

The chapter in question covers many a good aspect of the Moorcock epic. I also note that Moorcock has some traits in common with Philip K. Dick (1928-1982), uncrowned master of sf. They both wrote short novels, brimming with energy. Then I make this list of what they more have in common:


. Being Men of the Left but not letting this influence dominate their fiction as a whole, making their respective fiction into a tapestry of Life, the Universe and Everything.

. As writers sometimes said to suffer from the hectic pattern of ”having to write another paperback in an instant” but as a mere result the novels seldom came out bad.

. The novels having a slightly repetitive pattern, a kaleidoscope slightly turned around for each new opus, seemingly new and perfectly recognizable at the same time.

. Their novels tend to focus on one hero, venturing out by way of Fire and Movement, the sky’s the limit.

There you have it. Moorcock and Science Fiction Seen from the Right are worth checking up.

Apart from Moorcock my book covers fantasy authors like Tolkien, Dunsany, C. S. Lewis, Lovecraft and Robert Holdstock. And in the realm of science fiction proper it looks at Heinlein, Dick, Herbert, Pournelle, Niven, von Harbou, Huxley, Boye, Bradbury and Borges. All this, and H. R. Giger, are waiting for you in Science Fiction Seen from the Right.


Related
A New Canon of SF
Towards an Understanding of Right-Wing SF
[In Swedish:] Jag och sf-fandom