Actionism -- some musings about my philosophy of life 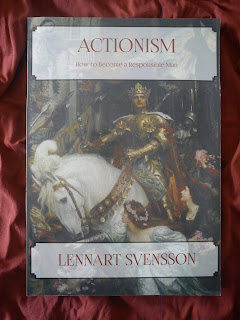 In 2017 I published the book Actionism. Hereby some deliberations on it. [And if you're Swedish, hereby a presentation of it in the royal Swedish language.]

How does a typical Actionist dress? – I’d say that he wears black pants and a grey jacket.

And what does he read? – He reads Actionism, Borderline, Castaneda, Bhagavad-Gita, early Heinlein, Dune.

His signature saying is, “Let’s get going, we can rest on the way, seeking Rest In Action = RIA.”

The Actionist is here to stay. We need him. He is the will-driven mindset finally coming into its own again, after a century of propaganda saying that “Will” is an illusion.

Without really being a ”movement Actionist,” you could say that Jack Steelnack is something of an Actionist. His thought is rather Actionist, if you’re asking me…!

All my books are “Actionist” in nature... all of them giving contemporary man a sorely needed live injection of willpower, striving and splendor.

“When a man decides to do something, he must go all the way, (...) but he must take responsibility for what he does. No matter what he does, he must know first why he is doing it, and then he must proceed with his actions without having doubts or remorse about them.” – Carlos Castaneda, quoted in Actionism – How to Become a Responsible Man.

First we had the godless superman, the atheist “Blonde Bestie”. Then came nothing. Then nothing... and now, at long last, we have the superman for the 21stcentury, spiritually led. I declare you the Spiritual Superman: the Actionist.

Afraid of death...? I might have the remedy. It’s called MMM = Memento Mori Mindset. I tell you more of it in Actionism.

The superman needs God as a regulating force, needs Him to stay sane... I declare you the Spiritual Superman.

I declare you the Spiritual Superman,

the Martian Messiah, the Pleiadean

Preacher – A Strong And Responsible

I declare you Absolute Man,

the Great Guide, the Chosen One.

Be a 51%-er... work through at least 51% of your karma, then the road to supermanism lies before you.

I Declare You the Spiritual Superman

Er, that doesn't seem really nationalistic to me...