Rave Review of My Jünger Book 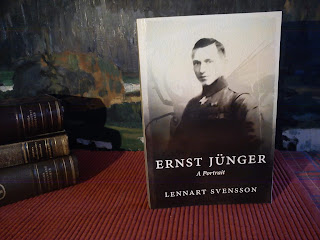 In Australia there was a magazine called Living Traditions. It isn't online anymore. It wrote about spirituality, history and culture. In 2014, it reviewed "Ernst Jünger -- A Portrait".


On the whole the unsigned review was positive towards my book. In fact, Living Traditions (= LT) seemed to have nothing negative to say about it.

For instance LT says this, about the life-story of Jünger you find at the beginning of the book:


Svensson’s biography (...) is precise and matter of fact, it avoids all the undue speculation and interpretation found in so many other biographies and offers a clear and accurate picture of Junger’s truly amazing life. He offers a detailed look at Junger’s role in WWI and WWII and his literary output.

LT summarizes various chapters of the book, LT in the process making these apt reflections:


The next chapters examines his [= Jünger's] other books such as his WWI volumes, here Junger has much in common with Julius Evola he does not just discuss war but the mindset required to be a devoted warrior. At the same time Junger produces more adventurous literature which is hard to place in a single genre, his books in this vein are enigmatic and thought provoking. On the Marble Cliffs is an example of this new style which can be read on multiple levels and needs reflection to be fully appreciated for the work of literature it is.

LT has more praise to give my book. Like this:


In chapters 20 and 21 Svensson goes way beyond a traditional biography and offers a substantial examination of German figures that influenced Junger and then offers an exceptional comparison of Junger with Yukio Mishima, Carlos Castenada and Julius Evola. In Chapter 26 after examining the role of religion in Junger’s work as well as reoccurring key esoteric themes Svensson looks at Junger the fantasy writer and compares him to others such as Tolkien. Svensson also considers other characteristics of Junger such as his surprising optimism, sense of play and poetic side.

And lastly the pay-off. LT seems to like "Ernst Jünger -- A Portrait", stating:


Svensson offers us a superb biography (...) Rather than get caught up in all the fruitless debate about Jünger in the 20’s he offers an honest yet nuanced approach which in my mind stands up rather well compared to academic biographies which spend their time in politically correct disputation. (...) Svensson has produced an amazing work which is not only approachable but perceptive. His analysis of obtuse aspects of Jünger’s work not found in other biographies makes this a must read by themselves. When you add the sheer comprehensiveness of the work this really is a biography of the very highest calibre.

That was that. More info about the book below.