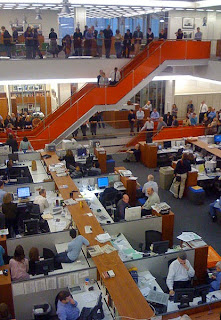 I'm a Swede. Here in Sweden MSM is having trouble and new media such as Fria Tider, Flashback and the whole free internet is gaining ground. And the picture is the same in the USA. Hereby a look at a new article on the subject.


A recent article on the site The Dollar Vigilante takes a comprehensive look at US media: print, new media and TV, all getting their share. And the drift is anti-NWO, a must these days. MSM = NWO, this has got to be said again and again. [Here's a blog post in Swedish on what the New World Order is.]

The article in question is written by Jeff Berwick, editor-in-chief of The Dollar Vigilante. "When propaganda fails, humanity awakens... the fall of mainstream media" is the title.

Berwick's article begins by looking at the flagship of American print media, The New York Times. Like the Swedish daily Dagens Nyheter it's in dire straits. It's going down, man...! Berwick gives us some indications of the NYT demise by way of an inhouse report. NYT is said to look with worry at new media upstarts such as...

“They are ahead of us in building impressive support systems for digital journalists, and that gap will grow unless we quickly improve our capabilities,” the report states. “Meanwhile, our journalism advantage is shrinking as more of these upstarts expand their newsrooms.”

“We are not moving with enough urgency,” it says.

A central issue for NYT is “a cadre of editors who remain unfamiliar with the web.”

“Many desks lack editors who even know how to evaluate digital work,” the report continues.

As in Sweden print in America doesn't know what to do about the advance of the web. Berwick summarizes the problems of print like this:


The paper's model is obsolete, but even worse than the model has been the paper's lack of interest in the truth. As the US empire has grown more out of control, more dangerous, and more insane, the NYT has functioned as a fourth branch of government, a gatekeeper for a totalitarian world a la 1984 or Brave New World. But the gig is up. The world knows NYT's complicity in erecting a sick and deranged world, and unless the paper breaks major news stories and outs itself as an undeniable friend of freedom, it will continue to lose revenue. No more can NYT expect to serve the elite and its bottom line at the same time. In the age of the internet, what David Rockefeller was once grateful for is no longer possible:


We are grateful to the Washington Post, the New York Times, Time Magazine and other great publications whose directors have attended our meetings and respected their promises of discretion for almost forty years...It would have been impossible for us to develop our plan for the world if we had been subjected to the lights of publicity during those years. But, the world is more sophisticated and prepared to march towards a world government. The supranational sovereignty of an intellectual elite and world bankers is surely preferable to the national autodetermination practiced in past centuries.

NWO-bashing galore, I like that. We have to expose the NWO, Rocky Fella and all.

After showing some statistics on how old media is mostly consumed by elderly people, Berwick goes on to say that renowned weekly Newsweek has had it:


Newsweek (which I call Newspeak) has released its last print issue. You'll remember one of Newsweek's last attempts to be relevant again was uncovering the wrong Satoshi Nakamoto as the creator of bitcoin. They found some guy with the right name in the phone book...You know, "quality journalism"...


CNN's viewership is at a record-low (the network recently laid off 40 journalists), while CNBC has suffered a viewership collapse as well... and this with the Dow at all time inflated highs. Imagine if the stock market were going down how low these numbers would be.

But once Larry King said that CNN would be better off showing re-runs of Spongebob Squarepants 24 hours a day, you knew it was over...

Larry King left CNN because he knew it would collapse. He left CNN for the Russian government propaganda channel, RT, because it is more respected and features more truth about the West. Twenty years ago, this would be have been unheard of for Larry King! A career-ender! Not today...Nope. Today it is a respect-earner. Oh, how things have changed...

Berwick then updates us on American new media. Under the headline "The New Media Takeover" we get this:


The New Media has taken over. Alex Jones is almost a household name and groups like Luke Rudkowski's We Are Change have revolutionized how people get information. (Editor's Note: We Are Change offers "Change Media University" to learn how to become a real investigative journalist that we highly recommend. Forget traditional school).For years now the most popular MSM personalities, like Glenn Beck, have followed the playbook of new media personalities in a bid to remain relevant. Now, in order to remain relevant people like Glenn Beck need to quote or interview people in the "alternative media".

And now for the grand finale, Berwick showing how the global "elite" has lost the info war:


It was not all that long ago that John Kerry and Zbigniew Brzezinski said that the internet, simply put, is making it hard for them to govern. Secretary of Statism, John Kerry, before a group of State Department workers told the audience that the world has been "complicated" by "... this little thing called the internet and the ability of people everywhere to communicate instantaneously and to have more information coming at them in one day than most people can process in months or a year."

Bill Clinton, laughingly even suggested the need for a "Ministry of Truth" over the internet, run by the US federal government, that would censor anything it did not deem to be "truth".

And that's how it's done: bashing the NWO "elite". This is what new media should be doing 24/7.