If You Want to See Antropolis, Look Around 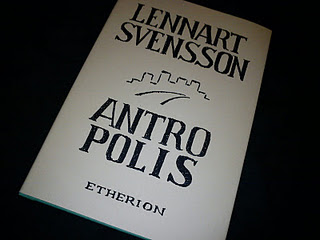 
"Antropolis" has a symbolical quality to it. Like "Metropolis" or "Heliopolis". Literary qualities aside, the title shines like a beacon: Antropolis.

The novel is available in Swedish only. Buy it here.

"Antropolis" relates how a certain Jenro Klao restores the ruins of a city and names it Antropolis, dedicating it to art, science and the humanities. Crystal technology and spirituality are the key words to this new age. When the story begins it's the year of 2165 and the city is thriving, but the forces of esotericism and technology now seem to clash in this utopia. Jenro Klao then decides to leave the city to its own measures for a while, going on a trip to olden times, to Faustian cities and metropolises teeming with combustion cars and scudding clouds. When Klao returns he has the blueprint for the pacification of the antropolitan strife, leading to a lasting spiritual way of life. It's a modern variety of "the mediator between head and hand should be heart".

So much for the plot. The concept of Antropolis is what Guillaume Faye would call an idea thrown in the face of history. It doesn't have to be correct or consistent in every detail; the mere symbolical and poetic qualities of the concept is sufficient to make it a classic. And I have reviews lauding the book, like this one on the Swedish think-tank Motpol.

Antropolis has, as intimated, a certain Gestaltkvalität. It's archetypal. We're heading for antropolitan times by default. We're heading for times with innate spirituality and a renaissance for art and science. Gone are the times dominated by fear, repression and brainwashing. Antropolis shall triumph. Look around, look out your window: it's there. Antropolis, man.

It's the emerging antropolitan culture you're seeing. If you want to see Antropolis, look around. In latin that would be: si Antropolis requiris, circumspice.


Related
Who Are the Ascended Masters?
Is Obama the Mahdi?
In Swedish: A Review of Antropolis