Infantryman of the Future: Equipment 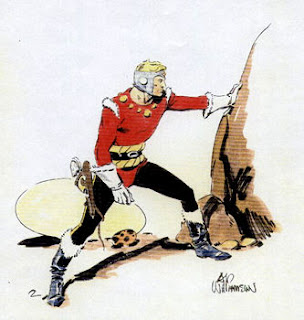 It's true that I don't believe in a major war erupting. However, that won't stop me from wondering how a future soldier would be equipped. Hereby some deliberations on future infantry equipment.


Sometimes I speculate on the weapons and equipment of future wars. For instance, what would a battle suit in a war with laser guns look like? My suggestion is the following -- so I give you, the infantryman of the future.


. The battle suit itself would be made of a nanotechnical fibre (= coal nano fibre). The fabric can be sealed against splinter and gas. The coal nano fibres can also be made to change color, thus enabling different camouflage patterns at the touch of a dial.

. With a generator (powered by, let's say, a micro turbine) the suit is constantly held at comfortable temperatures, enabling the soldier to fight anywhere from Sahara to Antarctica.

. A force field (powered by the same turbine as in previous point) guards the bearer from being hit by hostile laser beams.

. A comlink on the wrist of the soldier serves as battle computor and radio control.

. The helmet has a built-in radio (and microphone and earphone) and a vizor with functions like infrared, nightvision and binoculars. A hearing valve enables the hearing of sounds from the environment.

. The laser carbine would be carried separately and powered by batteries.

Other than that it could be said: the suit in question is not pressurized. And the helmet, though fairly hermetical, has no oxygen feed. The soldier would breathe normal air from the atmosphere. However, in times of chemical hazard the helmet can be sealed and, with a filter, function like a gas mask. For longer periods of fighting in gas-infested environments some spare oxygen could be needed. And a sealed, pressurized suit.

Now then, how would units of these soldiers function? How to lead them? What would their support be? These are interesting questions, no doubt, but they would take an entire essay to answer. So this piece ends here.