A Chapter From my Wagner Bio: Wagner and Popular Culture 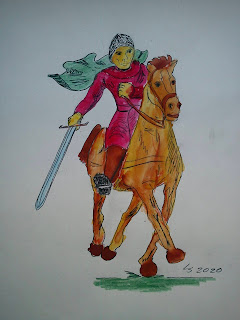 I have written a biography of Richard Wagner. He was a classical composer living in the 19th century. He composed operas about heroes and villains, traditional music dramas showcasing the wonders of the western cultural heritage. Today, Wagner's music is loved by both opera fans and movie-goers. Below are some lines from my Wagner bio, an excerpt of chapter 17: "Wagner and Popular Culture". It's about the Wagner Leitmotif technique used in film scores, and the Wagner music employed in "Excalibur". And about a certain CD having helicopters on the cover.


Helicopters on the Cover

Sometimes record companies compilate ”best of”-collections with Wagner ouvertures and orchestral pieces. For example, today on the internet you can buy a compilation of Wagner orchestral pieces and ouvertures on CD, called Twilight of the Gods: The Essential Wagner Collection. The subtitle is: ”Music of Terrifying Power and Transcending Beauty”. It was originally issued in 1998 by Deutsche Grammophon, a venerable label for classic music. Here we get standards such as ”The Ride of the Valkyries”, ”Siegfried’s Funeral March”, ”Siegfried’s Rhine Journey”, overtures to The Flying Dutchman, Tannhäuser and The Master-Singers, ”Good Friday Music from Parsifal” and many more.

This all is very fine and proper. But the cover image might seem strange, sporting as it does American Bell UH-1 ”Hueys” coming at you, the combat transport helicopter employed by US Army in Vietnam. However, the connection is apt; Francis Coppola’s movie about the Vietnam War, Apocalypse Now (1979), in a scene uses ”The Ride of the Valkyries” as a soundtrack. Technically this is not incidental, atmosphere-creating music but so called source, music actually played in the cinematic action itself, since the major in charge of the cavalry battalion in question has equipped his helicopters with loudspeakers that play the actual melody during assaults. This in order to scare the enemy.

When seeing the actual film I didn’t quite like that scene, it gets a little over the top, something of an overstatement: ”Look at the militarist Wagner’s music being used in the most awful of all wars, how fitting...!” That said, now the connection is done – Vietnam War and ”The Ride of the Valkyries” – so I have to admit that the CD in question having that film image of the helis, silhouetted against the sun, is very efficient. It’s got edge, being a smart way of selling classical music to youngsters of today: ”Wagner, terryfying power, awesome man...”

I might cater to ulterior needs in saying this. But Wagner’s music is rich and deep and it can withstand a lot, from stagings with modern props to CD covers with the war machines of the NWO.

Richard Wagner's opus lived on, even in the 20th century, even beyond the opera stage. As for Wagner music used in soundtracks my best example is John Boorman’s Excalibur (1981). True, this film also employs music from another classical composer, Carl Orff and his ”O Fortunata” from Carmina Burana, since then a staple in circumstances like these. But the mainstay of the soundtrack is from Wagner. In scenes with Lancelot and Guinevere we hear the Tristan ouverture, and in sir Perceval’s search for the Grail we hear, what else, the prelude to Parsifal.

Then there is the main theme, with parts of ”Siegfried’s Funeral March” from Twilight of the Gods. This music is heard at the beginning, with a text plate saying ”The Dark Ages... The Land was divided and without a king”, followed by rhapsodic scenes of fighting, of Merlin etc. The soundtrack to all this is Wagner and it’s congenial. The same Wagner piece – the funeral march – is there at the end of the film, during the battle in which Arthur is killed by Mordred. Just before he dies Arthur tells Perceval to take Excalibur and throw it into the lake – the lake from which it once was given by the hand of the Lady of the Lake.

Eventually Perceval finds the lake and gets ready to throw the sword. At the same time, in anticipation, the hand of the Lady rises from the surface – and then we hear Wagner’s ”sword” leitmotif, flashing forth simultaneously as a light is reflected in the shiny blade during the throwing. It’s almost better than a Wagner opera. Anyhow, Boorman succeeded in taking old music and having it fit like a glove to this scene, the sword leitmotif sounding out exacly when the hand of the Lady catches the hilt of the sword and then sinks with it, never to be seen again.

All this is very much in the spirit of Wagner. The music isn’t ironically employed as in Apocalypse Now. This is the Wagnerian spirit, translated onto the screen, in a story that coheres. Then there is the employment of the leimotif itself, Excalibur being a sword showcased with Wagner’s sword theme: there is a chance of it getting too clever-clever, too contrived, but no, this just nails it, if I may say so. The use of classical music in Excalibur is on par with what Kubrick did in 2001.

Boorman’s Excalibur, by being produced in the pallid era of the early 1980’s, with cold war, recession and unemployment, could have been a dour, anti-heroic, anti-romantic tale. But true artistry was about in writing the script, in producing and filming it so if you want to ”get that Wagner feeling” on screen, in a non-operatic, modern, cinematographic way, go see Excalibur.

Leitmotif, in case you didn’t know already, is a musical phrase that symbolizes a person, a thing, a place or a feeling. Wagner didn’t use the term itself but ever since the premiere of The Ring it’s been widely used to characterize this Wagnerian effect. Musical phrases such as leitmotifs led an embryonic existence before Wagner but he made it into a modus operandi, slightly overemploying it, like in The Ring.

However, after Wagner the leitmotif technique found its way into other musical areas than opera, preferably film music. To have a musical phrase repeating itself in the theme song (the, if you will, ”overture”) as well as here and there in the film score proper, became common practice after sound film came of age. For example the composer Bernard Herrmann (1911-1975), with film scores such as Psycho (1960) and Vertigo (1958), knew the Wagner way of making music. For instance, in the latter film there’s echoes of ”The Love-Death of Isolde” from Tristan and Isolde.

Wikipedia [entry: Leitmotif] says that leitmotifs, in one sense or the other, have occured since the advent of sound film:


Erich Wolfgang Korngold's 1938 score for The Adventures of Robin Hood, for example, can be heard to attach particular themes and harmonies to individual characters: Robin, Will, Much, and Gisbourne are all accompanied by distinctive musical material. A more modern example is the Star Wars series, in which composer John Williams uses a large number of themes specifically associated with people and concepts (for example, a particular motif attaches to the presence of Darth Vader and another to the idea of the Force). In the film trilogy Lord of the Rings the dramatic orchestral score has hundreds of Leitmotifs recurring throughout.